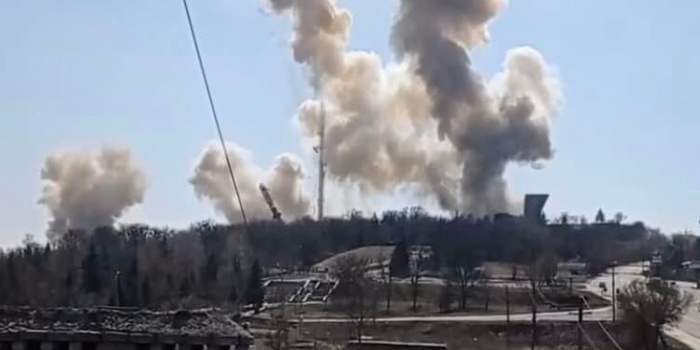 Russian occupiers hit the TV tower in the town of Izyum, Kharkiv region. This was reported by Maksym Strelnyk, the head of the youth and sports department of the local city council.

According to him, the memorial to the Second World War on Kremyanets Mountain was also wiped out.

"Russian occupiers are savagely destroying the historical memorial to World War II on Mount Kremyanets in Izyum. As a result of enemy shelling, not only historical monuments but also our television tower was destroyed. Ruscists (Russian+fascists –n/tr) are worse than fascists! We won’t forget it! We won’t forgive it! After our Victory, we will restore all our monuments in Kremyanka and be sure we will rebuild a new TV tower, which will be highlighted in yellow and blue. Glory to Ukraine!" – as Strelnik wrote.

As IMI reported, during the month of Russia's attack on Ukraine (from February 24 to March 24), the Russian occupiers fired on 10 TV towers in Ukraine.