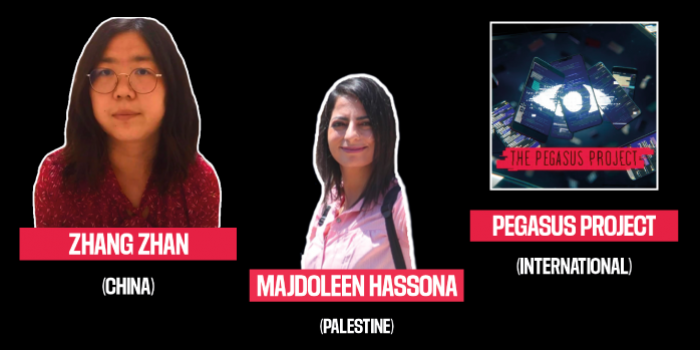 rsf:org
The 2021 Reporters Without Borders (RSF) Press Freedom Awards, announced today, have been given to the Chinese journalist Zhang Zhan in the courage category, the Palestinian journalist Majdoleen Hassona in the independence category and the Pegasus Project in the impact category, as this is reported by Reporters sans frontières.

RSF’s press freedom prizes are awarded every year to journalists or media that have made a notable contribution to the defence or promotion of freedom of the press in the world. This is the 29th year they have been awarded.

The 2021 awards have been given in three categories – journalistic courage, impact and independence. Six journalists and six media outlets or journalists’ organisations from a total of 11 countries were nominated.

The 2021 Prize for Courage, which aims to support and salute journalists, media outlets or NGOs that have displayed courage in the practice, defence or promotion of journalism, has been awarded to the Chinese journalist Zhang Zhan.Despite constant threats, this lawyer-turned-journalist covered the Covid-19 outbreak in the city of Wuhan in February 2020, live-streaming video reports on social media that showed the city’s streets and hospitals, and the families of the sick. Her reporting from the heart of the pandemic’s initial epicentre was one of the main sources of independent information about the health situation in Wuhan at the time. After being arrested in May 2020 and held incommunicado for several months without any official reason being provided, Zhang Zhan was sentenced on 28 December 2020 to four years in prison for “picking quarrels and provoking trouble.” In protest against this injustice and the mistreatment to which she was subjected, she went on a hunger strike that resulted in her being shackled and force-fed. Her friends and family now fear for her life, and her health has worsened dramatically in recent weeks.The 2021 Prize for Impact, which rewards journalists, media outlets or NGOS that have contributed to clear improvements in journalistic freedom, independence and pluralism, or increased awareness of these issues, has been awarded to the Pegasus Project.

The Pegasus Project is an investigation by an international consortium of more than 80 journalists from 17 media outlets* in 11 different countries that was coordinated by the NGO Forbidden Stories with technical support from experts at Amnesty International’s Security Lab. Based on a leak of more than 50,000 phone numbers targeted by Pegasus, spyware made by the Israeli company NSO Group, the Pegasus Project revealed that nearly 200 journalists were targeted for spying by 11 governments – both autocratic and democratic – which had acquired licences to use Pegasus. This investigation has made people aware of the extent of the surveillance to which journalists are exposed and has led many media outlets and RSF to file complaints and demand a moratorium on surveillance technology sales.

The 2021 Prize for Independence, which rewards journalists, media outlets or NGOs that have resisted financial, political, economic or religious pressure in a noteworthy manner, has been awarded to the Palestinian journalist Majdoleen Hassona.

Before joining the Turkish TV channel TRT and relocating to Istanbul, this Palestinian journalist was often harassed and prosecuted by both Israeli and Palestinian authorities for her critical reporting. While on a return visit to the West Bank in August 2019 with her fiancé (also a TRT journalist based in Turkey), she was stopped at an Israeli checkpoint and was told that she was subject to a ban on leaving the territory that had been issued by Israeli intelligence “for security reasons.” She has been stranded in the West Bank ever since but decided to resume reporting there and covered the anti-government protests in June 2021 following the death of the activist Nizar Banat.

“For defying censorship and alerting the world to the reality of the nascent pandemic, the laureate in the ‘courage’ category is now in prison and her state of health is extremely worrying,” RSF secretary-general Christophe Deloire said. “For displaying a critical attitude and perseverance, the laureate in the ‘independence category has been unable to leave Israeli-controlled territory for the past two years. For having revealed the scale of the surveillance to which journalists can be subjected, some of the journalists who are laureates in the ‘impact’ category are now being prosecuted by governments. This, unfortunately, sums up the situation of journalism today. The RSF Award laureates embody the noblest journalistic qualities and also pay the highest price because of this. They deserve not only our admiration but also our support.”

Previous winners of this prestigious prize, which was created in 1992, have included the Russian journalist Elena Milashina (2020 Prize for Courage), the Saudi blogger Raif Badawi (Netizen category prize in 2014) and the Chinese Nobel Peace laureate Liu Xiaobo (Press Freedom Defender prize in 2004). 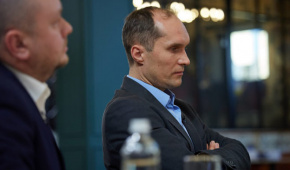 Australia challenges Facebook to back anti-troll defamation law - Reuters
Blogs
Sanctions against Medvedchuk’s TV channels. The first estimates
Do you want to be first to learn about the new research of the Institute of Mass Information? Subscribe to the newsletter!