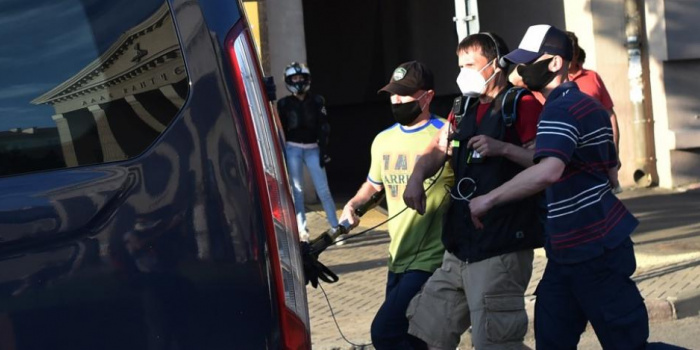 Reporters Without Borders (RSF) condemns the arrests of many journalists in the past days in Belarus, as the authorities try by every possible means to stop them covering rallies in support of opposition candidates in the upcoming presidential election. The European Union must press the government to stop the harassment, RSF said.

Several journalists had already been arrested since the start of the presidential election campaign but this is the first time that the police have targeted reporters who had valid accreditation.

The victims included reporter Aliaxandr Pazniak and cameraman Siarhei Bahrou, who were beaten and handcuffed during their filmed arrest on 20 June in Hantsavichy, a town 180 km south of Minsk, where they were covering a demonstration for the local independent newspaper and website Hantsavichy Chas.

More than 270 people, including at least 14 journalists, were arrested during rallies in Minsk and other cities on the evening of 19 June, the deadline for would-be candidates for the 9 August presidential election to collect the necessary signatures.

The police targeted both freelancers and the representatives of independent and foreign media including Reuters, Radio Svaboda (RFE/RL’s Belarusian service), the Belarusian exile radio station Euroradio and the news sites Tut.by and Onliner.by. Mobile Internet was disconnected ahead of the rallies, obstructing journalists.

“In response to this unprecedented show of support for opposition candidates, the authorities are trying to gag the media and keep suppressing all forms of pluralism, both political and journalistic,” said Jeanne Cavelier, the head of RSF’s Eastern Europe and Central Asia desk.

“Noting that, on the eve of these arrests, EU Commission President Ursula von der Leyen and Belarusian Prime Minister Roman Golovchenko participated in a summit meeting between the EU and six Eastern European partner countries, we urge Von der Leyen and the EU commissioner for neighbourhood, Olivér Várhelyi, to condition any negotiation with Minsk on an end to the harassment of journalists and the release of all those still held.”

Ruled since 1994 by President Alexander Lukashenko, who until now has been reelected in the first round every five years, Belarus is ranked 153rd out of 180 countries in RSF's 2020 World Press Freedom Index.