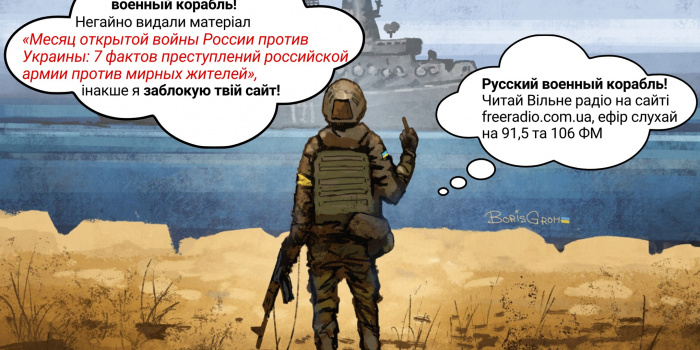 Roskomnadzor demands that "Vilne Radio," which broadcasts in Bakhmut (Donetsk region) and the neighboring settlements, remove content about the russian army's crimes against civilians during the first month of the full-scale invasion. The russian institution's demand was expressed in an email to the editorial office, sent on April 14.

The journalists note that after Roskomnadzor's letter, the number of readers from russia has significantly decreased.

"Yes, a lot of russians who probably liked to see quality content used to follow us," "Vilne Radio" said, adding:

“We can advise russians who want to read up-to-date and truthful information to follow our Telegram channel t.me/DONregion and set up a VPN. (you can learn how to do it here: cutt.ly/KH9iZQm)."

It should be noted that the russian register of banned websites currently contains information about the block of only one of "Vilne Radio's" articles, which was mentioned in Roskomnadzor's email.

It will be recalled that in March, the editorial office of "Vilne Radio," which broadcasts in Donetsk region, received threats via email.