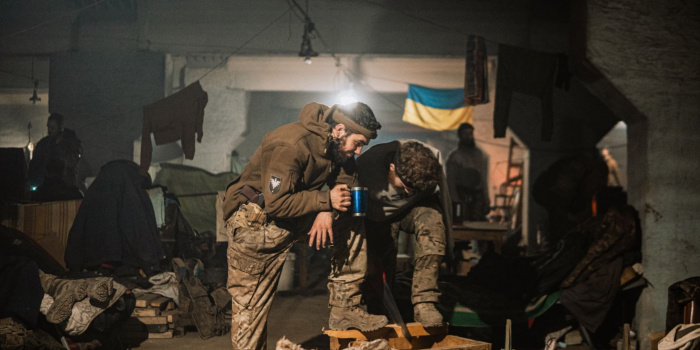 Relatives of the Ukrainian soldiers who heroically defended Mariupol and are now held captive by the russians appealed to the international media to visit the colony in occupied Olenivka, Donetsk region, and show the conditions in which their relatives are being held.

This is stated in a video address to journalists and the Red Cross, posted on the "Association of Families of Azovstal Defenders" Telegram channel, ZMINA reports.

The appeal emphasizes that under the Geneva Convention, prisoners have the right to call their relatives twice a week. However, relatives and friends of Azovstal defenders have not heard from them since the fighters left the plant. Only sometimes do the soldiers text "+" or "ok" to their relatives. No other information about them is known.

"We know what methods the russians can use. Azovstal defenders did not deserve this, they followed their order and went through what others can not even imagine. Now it is them who need protection and help," said the heroes' relatives.

They reminded that the Red Cross was responsible for the evacuation. Now its representatives must be present at the place of detention of prisoners, to ensure that all rules and laws are observed.

"We must not forget the heroes of Azovstal! The world must know the truth and see what it has been promised to see," said the relatives of Mariupol defenders.

Earlier, the Azov Regiment warned of provocative reports and statements from Azovstal soldiers, who are currently being held captive by the russian occupiers. Such content may contain propaganda. Ukrainians are asked to only trust verified information.

We remind that in his May 16 address, commander of the Azov regiment Denis Prokopenko declared that defenders of Mariupol have fulfilled "the highest military command's" order to preserve lives. At that time, about 1,000 Ukrainian soldiers defending Azovstal were taken out of the plant and moved to the territories of Donetsk region not controlled by Ukraine.

According to the representatives of the Ministry of Defense of Ukraine and the General Staff, it is planned to return Azovstal defenders home through an exchange procedure.

On May 17, russia announced their plans to interrogate Ukrainian servicemen in Rostov pre-trial detention center, as well as expressed the idea of ​​banning the exchange of so-called "Nazi criminals." The State Duma does not hide that they want to do this to prevent the return of Ukrainian defenders to their homeland.

On June 6, President Volodymyr Zelenskyy announced that more than 2,500 Ukrainian Azovstal fighters were in russian captivity. According to him, the Main Intelligence Directorate of the Ministry of Defense is working on the release of the fighters. The President also stressed that he does not take the statements by the russian authorities and ORDLO militants about the future of Ukrainian defenders seriously, as they are trying to use them as PR.