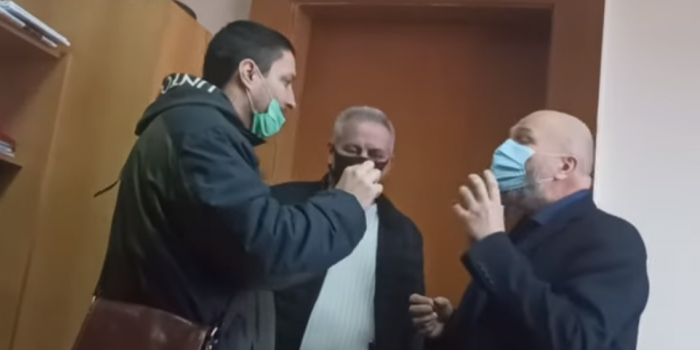 Screenshot from Golos IF

The online edition Golos IF (Ivano-Frankivsk) reported that employees of the regional state administration prevented their journalists from attending an extraordinary meeting of the commission of the Department of Health on December 23.

At first, the journalists managed to get in the office where the meeting was held. According to the newspaper, the members of the commission considered the newspaper's information request as to eventual falsification of the management experience of one of the candidates. The members of the commission also allowed the media to record the meeting on video.

Then, Igor Temekh, director of the regional state administration's legal department, and a man who introduced himself as legal counsel, Konstantin Shostachenko, came to the office and asked journalists to get accreditation at the Department of Health. But the secretary refused to register them, noting that such a procedure is not provided.

When the journalists wanted to return to the meeting, the staff of the regional state administration denied them access.

"The legal adviser grabbed journalist Rostyslav Hudzinsky by the arms and pushed him away from the front door of the office of the deputy head of the Regional State Administration, where the commission was taking place," the statement said.

The edition noted that Rostyslav Hudzinsky repeatedly showed the regional state administration officials his press card, introduced himself and asked to stop obstructing the legitimate professional activity of journalists. At the same time, during a conversation with Hudzinsky, Igor Temekh claimed in the video that he did not introduce himself and demanded that he register. The director of the legal department also claimed that "there was no meeting at all."

The journalist called the police and filed complaint on obstruction. The whole happening was filmed on a mobile phone by the newspaper's editor-in-chief Iryna Vasylyshyn. Later, Ihor Temekh snatched a mobile phone from the journalist's hands.

In addition, according to the newspaper, employees of the regional state administration began to push journalists out of the reception of the Department of Health, "grabbing the editor-in-chief of Golos IF Irina Vasylyshyn by the arms, intimate parts of the body and tore the jacket of the journalist Rostislav Gudzinsky."

The phone was returned to journalists only some time later, when Hudzinsky "started shouting loudly, calling the members of the commission of the department of health for help."

After the incident, journalists complained to the police about obstruction of the legitimate professional activities of journalists and steal other people's property.

The publication also reminded that on November 24, five young men ran into the editorial office and doused journalists Rostyslav Hudzinsky and Oleksander Baturo with feces. According to this fact , the Ivano-Frankivsk police initiated criminal proceedings under Part 3 of Art. 171 (Obstruction of lawful professional activity of journalists) of the Criminal code of Ukraine.