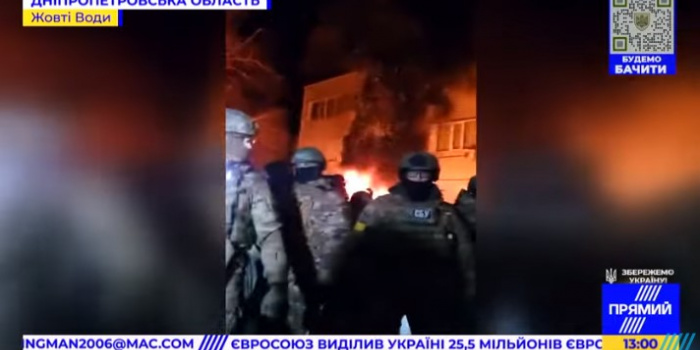 The video shows a law enforcement officer hitting a TV channel operator holding a camera in the neck. Then another security officer takes the camera from him.

Later, a law enforcer with a yellow armband kicks a media representative with his leg. All the while, the security service officers are using obscene language.

As IMI reported, on November 2, "Pryamy" TV channel reported their filming crew being attacked on the night of November 2 in Zhovti Vody, Dnipropetrovsk oblast. The journalists were on an editorial mission, filming the rallying tobacco factory workers who had set up tents in the factory's courtyard and were standing guard on its premises day and night. Security forces with SBU badges beat the cameraman and smashed the TV channel's camera. All the while, thery were swearing obscenely.

In her comment to IMI, the State Bureau of Investigation spokeswoman, Tetyana Sapyan, said that the Bureau is aware of the incident with the journalists, but the details and circumstances are currently being investigated by the SBI.