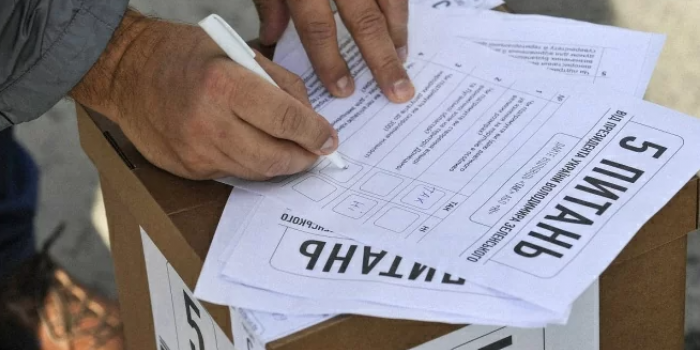 The presidenial office (OP) forwarded a request from the online publication Babel about national poll qith the questions initiated by the head of state to the “Servant of the People” party. This was reported by "Babel" .

“Babel” sent a request to the OP on October 20, but from there it was forwarded to the "Servant of the People", explaining that it was the party that paid for the poll.

“Babel” asked the OP about the organization of the survey, how much money was spent on it, how long the count would last, who would conduct it and how they planned to ensure transparency and fairness of the count.

The “Servant of the People” party, which ordered and paid for the president's all-Ukrainian poll, said in response to a request that all costs be shown in a report to the National Agency for the Prevention of Corruption (NAPC).

The party also reported that the polls were paid with party dues. How much, the answer did not specify, emphasizing that these data were not public. The political force referred to the legislation that a legal entity that was not a subject of power was obliged to provide data on the use of funds only from the state budget.

We will remind, on October 13 Volodymyr Zelensky in the video address announced that on the day of local elections, October 25, 2020, the national poll would be launched with five questions, but  he failed to reveal its formulation.

On October 15, all five issues were voiced by the President's Office. The OP also noted that the poll, unlike the referendum, will not have direct legal consequences

On October 26, “Servant of the People” presented the results of Zelensky's survey and revealed the name of the company that conducted it. This was Ze Media , with which the party cooperated before the parliamentary elections.

The Kyiv District Administrative Court refused to consider a lawsuit to cancel the poll results .

On October 13, the “Reanimation Package of Reforms” coalition called on the president Volodymyr Zelensky to refrain from holding a nationwide poll on October 25, local election day, without formulating questions in advance and in the absence of a legislative procedure for conducting such a poll.