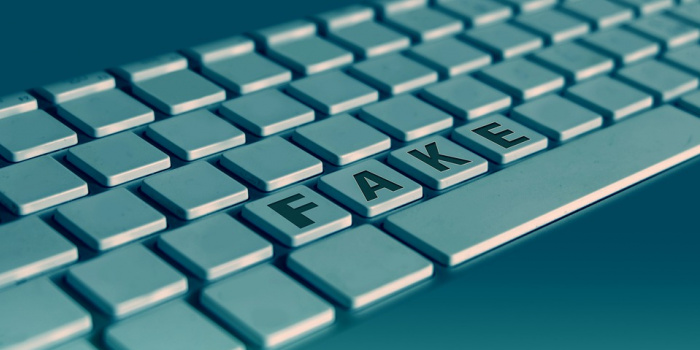 Political confrontation, Russian influence and coronavirus. These are three whales on which the fake news campaigns in Ukraine stood in 2020.

In 2020, the challenge was so threatening that the Security Service of Ukraine was forced to counter the fake news deluge. The SBU began to refute the fake news about the coronavirus and detain those who spread them. In this context, no one from government and political circles was  punished, even if they also produced and spread fake news.

The Institute of Mass Information mentioned 10 symptomatic fake news in 2020.

" Mendel is pregnant by Zelensky"

On July 7, one of the hugest fake news of the year occured: "Mendel is pregnant by Zelensky." The authors behind this fake news were Roman Revedzhuk (under the presidency of Petro Poroshenko he was a member of the media pool) and former politician Hennady Balashov. The latter recorded the video "Is Mendel Zelensky's mistress?", viewed by more than 300,000 users on his YouTube page .

" In the Governmental quarter the rumours are massively shared, saying that Mendel was mistresss of Zelenskoho. And not only mistress, but she would be pregnant mistress. Could it be that the President chose to follow suit of Kennedy, Clinton, Yanukovych? If rumors are confirmed, then we have to expect a collapse of "public servants " , - Balashov said in the video.

When Mendel herself publicly called this information a fake news, Balashov and Revedzhuk recorded another video: "Mendel is not pregnant by Zelensky? Revedzhuk does not agree."

Five months have passed since then, and no signs or evidence of Mendel's pregnancy have appeared.

Zelensky and "empty plates" of the military

In October, Zelensky went to the Donbass to the military. The photo report of the President's Office had a picture that became the basis for the fake news. Zelensky and Andriy Yermak eat borscht on it, and the military sit next to them without plates. "No  lunch was served for the servicemen, because no lunch was supposed to be served to, " political technologist Taras Berezovets wrote on his Facebook page. This was shared by supporters of Petro Poroshenko, with whom Berezovets teamed with.

"The oddest fake news this year was debunked, " Yermak replied on Facebook . To figure out the servicemen in Donbass have no meal, this is an underside”. And actually, other photos showed that the servicemen were given plates together with the head of state. It's just that Zelensky and Yermak started eating before the borsch was served to other persons at the table.

The fake news were also spread with the filing of the ruling team. Thus, in mid-December, Oleksiy Arestovych, the newly appointed information policy adviser of the Ukrainian delegation to participate in the Tripartite Contact Group, admitted that misinformation had been posted on the TCG's Facebook page. It was said that the soldier, "being under effect of intoxication, defected without permission to the side of the enemy (without weapons) and died of alcohol or drug intoxication."

Instead, the Censor.Net website got and published the results of the forensic examination. It was said that the death was caused by asphyxia, the category of death was a violent one.

After that, Arestovich had to apologize. He explained that there was a technical error: he confused the version of the representatives of the Russian side, which was spoken of in the internal correspondence, and the press release. "In fact, he made public the version of the occupiers," Arestovich concluded.

Poroshenko is among the three biggest corrupt officials in the world

In the summer, a photo of the world's three biggest corrupt officials was shared on the Internet. Among them is Petro Poroshenko. Currently, this photo is marked on Facebook as a false information. Because there was no rating at all.

It was an infographic from a story on the American TV channel CBS. It was about the persons involved in the so-called Panama Papers and cited several rich people from around the world who were hiding money offshore. And Poroshenko found out to be cited among them. Moreover, US journalists did not rank the persons.

Letter from the SBU to Poroshenko's party

Petro Poroshenko's party members also got caught on a hook. In October, Oleksiy Honcharenko, a representative of “European Solidarity” party, showed a "letter from the SBU" on his Facebook page and on TV channels close to Poroshenko .

With this document, the secret service allegedly asked to provide a list of all candidates for the local elections, a brief description and detailed biographical data on each candidate from “European Solidarity”, as well as information on the funds spent on the election campaign . "This is undisguised pressure and violation of the law, and we demand a reaction from Mr. Bakanov," Honcharenko said at the time.

However, this letter turned out to be a fake news – a simulacrum of correspondence with the illegal demands of the SBU from malefactors of Russian origin. This was revealed by the Civic Network "Opora", which investigated the e-mail received by the party. In particular, it was established that the e-mail only imitated the SBU e-mail address, but in fact the letter came from the mailbox of the lenta.ru domain .

" We call on political parties and candidates to conduct a comprehensive investigation of suspicious incidents before making public accusations against the authorities and political competitors ," Opora concluded.

One of the biggest Russian fake news of 2020 was the campaign about "secret American laboratories in Ukraine." In the spring, the Institute of Mass Information separately studied the dissemination of this misinformation. 66 news items were found on five sites that were posted during the month as part of this campaign.

It was about 15 Ukrainian laboratories, which are allegedly run by the Americans. Moreover, it is as if the coronavirus was created in these laboratories. Such news was spread with reference to the representatives of the pro-Russian occupiers of Donbass and the leaders of the "Opposition Platform - For Life" party.

The SBU also called not to spread such fake news." We urge politicians not to spread false information about the existence of foreign biological laboratories in Ukraine and take care of the interests of the country, not on their ratings ," – SBU said in its FB-message.

Exchange of nuclear strikes in Ukraine

After "secret laboratories", Russian propaganda launched another fake news in Ukraine. "The Ukrainian government has not enough with Pentagon biolabs, now American bombers capable of carrying nuclear weapons will fly over Ukraine," the news was posted on the “Opposition Platform – for Life” website in September.

Medvedchuk's party's message contained a number of fake news. The statement about the threat of "exchange of nuclear strikes on the territory of Ukraine" looked the more impressive one.

Thus, the pro-Russian party presented the joint actions of Ukrainian and American aircraft in the sky over Ukraine. In particular, with the participation of B-52 strategic bombers.

Of course, no one exchanged nuclear strikes. And the fake news was another element of the information war.

The military exercises "Joint Efforts - 2020" were accompanied by another fake news, about the dead soldiers.

In September, the Kherson police website published the news "In the Kherson region, the police are investigating the circumstances of the death of American military advisers." Allegedly, during military exercises on the territory of Oleshkivsky range, a tragedy occurred: an artillery shell hit a bunker where American military advisers were. The text noted that eight people died from their injuries.

This news was picked up by a number of mass media. However, later the police reported: it was a fake news. "Unauthorized interference with the official website of the National Police has been recorded. In this regard, an inaccurate information was disseminated on some websites of regional police departments," the National Police explained.

Helicopters over Kyiv and an infected train

Simultaneously with the coronavirus pandemic, fake news about the disease were actively spreading. So, in March on social networks there was a fake news about night spraying over Kiev of chemicals from the helicopter for disinfection. At the same time, they "advised" to close the balconies and not to be on the streets from 23:00 to 5:00. SBU undertook to disprove this fake news.

The special services also reported the spread of misinformation about the "infected train" that arrived in Kyiv from Riga. " Almost every car has people with temperatures around 40. People are not allowed to quit the train, "some mass media reported. The SBU denied it. "The only truth in this information is that the train really arrived from Latvia. It really brought home our compatriots. All passengers underwent temperature screening," the police explained.

In several cities in March, videos of bus fights were attributed. Reporters on social networks insisted that it was Kyiv / Lviv / Vinnytsia. And the fight happened because one of the men was coughing in the cabin and allegedly had signs of coronavirus. In fact, the conflict occurred much earlier and was not related to the disease, but to the thefts committed in the bus. "The primary sources of this video were bots, including pro-Russian ones. The abnormal" viral "distribution of the material indicates the involvement of bot farms aiming to destabilize the situation," the SBU said.

Law enforcement officers not only denied the fake news about the coronavirus, but also actively monitored the people who shared them. So, in the middle of April during lockdown more than 150 people were found out who were engaged in misinformation.

Lard and garlic from the coronavirus

Simultaneously with the fake news of the coronavirus some false reports of miraculous treatment of the disease began to appear. Secretary of the National Security and Defense Council Oleksiy Danilov also contributed to this. " The best cure for the coronavirus is onions, lard and garlic , " he told in the 1 + 1 TV talk show “Right to Power” in late February.

These wordds could be taken as a bad joke. But in July, in an interview with “Ukrayinska Pravda”, Danilov assured that he was not joking. "I was not joking. I can repeat to you today: if you use phytoncides, which are in both garlic and onions, it is very useful. Because all viruses - they are afraid of it," -  the Secretary of the National Security and Defense Council said.