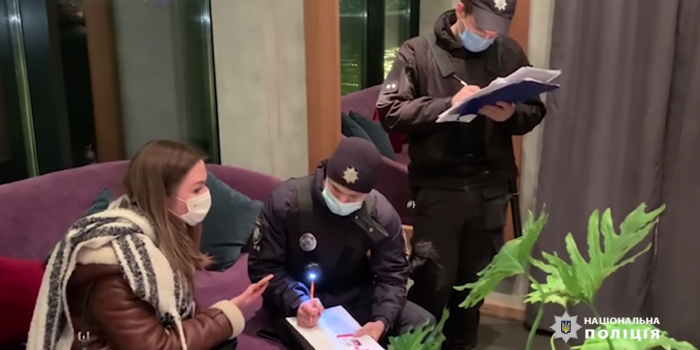 Several journalists were attacked and held captives in “Havana” restaurant in Kyiv, which was open during the weekend lockdown. The journalists were freed after police opened the door by force, as this was reported on the website of the National Police of Kyiv.

The incident occurred on November 15 on Naberezhne Shosse Street. The journalists informed the police that the administration of the restaurangt had interfered with their professional activities, as they were performing the editorial task. The patrol units, special forces and the investigative task force of the Pechersk Police Department arrived to the scene.

Police found that the restaurant, despite quarantine restrictions, was operating normally and receiving visitors. When journalists arrived at the establishment, a verbal conflict arose between the film crew and the administration, during which an employee of the establishment hit the correspondent. After that, the film crew was locked in a restaurant and not released.

The administration and security of the restaurant did not react the demands of the police to open the doors and set free the mentioned persons, so the officers used force.

The police drew up an administrative report on the director, under Art. 44-3 of the Code of Ukraine on Administrative Offenses.

Investigators also initiated criminal proceedings under Part 3 of Art. 171 (“Obstruction of lawful professional activity of journalists”) of the Criminal Code of Ukraine. For the commission of this offense, law enforcement officers detained two employees of the institution, born in 1982 and 1989. The men were detained under Article 208 of the Criminal Procedure Code of Ukraine.