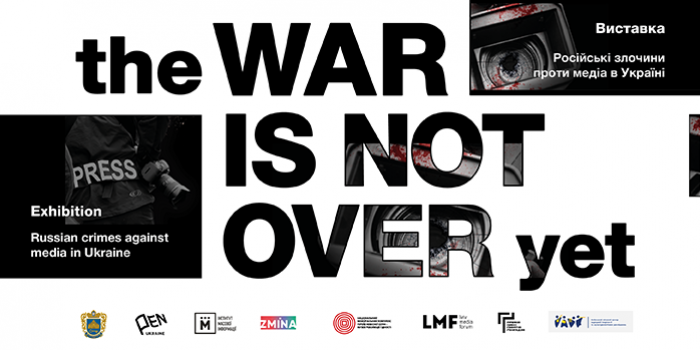 A photo exhibition about journalists during the war "The War Is Not Over Yet" will start on June 23 at 1:00 p.m. in Taras Shevchenko Park in Kyiv.

It will last until July 6.

The project aims to tell the story of those who make the world aware of russia's war against Ukraine, which includes journalists who died, were wounded, have come under fire, were captured or persecuted since the start of the full-scale invasion.

Some media workers drop their professional activities and join the Armed Forces of Ukraine. Some are actively fighting on the information front, recording the course of the war and telling the truth about it to the world.

Thanks to Ukrainian journalists, photographers, camerapeople and fixers, the international community learns the news from the frontline and sees evidence of russian war crimes.

Now that four months have passed since the start of the full-scale invasion, it is more important than ever to raise the world's attention to Ukraine and remind everyone that the war is not over. The war is not over yet.

The world media should keep covering the crimes committed by the russian occupiers instead of spreading destructive narratives about the need for "territorial concessions" and "compromises" on Ukraine's part.

This exhibition is an expression of solidarity with the men and women working in the Ukrainian media, who are fighting for the truth, risking their own lives.

At the time of the exhibition being prepared (June 15, 2022), 33 killed Ukrainian and foreign journalists were known (according to the Institute of Mass Information). 8 of them died in the line of duty. 25 were killed as combatants or by russian shelling or torture.

At least 13 other journalists were injured and at least 15 went missing.

Since the start of the full-scale invasion, russia has committed over 300 crimes against journalists and the media in Ukraine.

Read more about russia's crimes against the media in the chronicle by the Institute of Mass Information.

The event will be supported by the State Administration of Shevchenkivsky District of Kyiv, PEN Ukraine, the Institute of Mass Information, ZMINA Human Rights Center, the National Museum of the Revolution of Dignity, Lviv Media Forum, the Heorhiy Gongadze Award, and the Kyiv City Center for Folk Art and Cultural Studies.

The exhibition's opening will have consecutive interpretation into English.