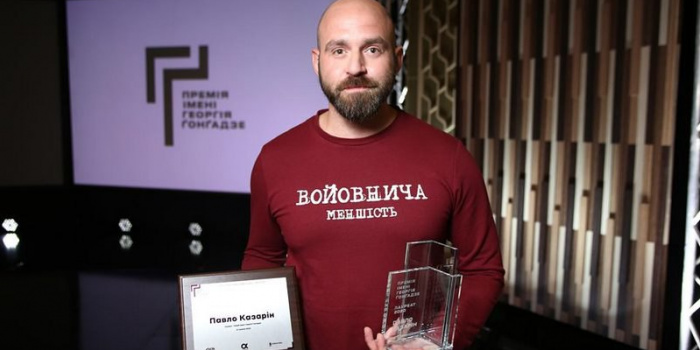 Publicist and TV presenter Pavlo Kazarin was named the winner of the Georgy Gongadze Prize, as Radio Liberty reported.

The other two finalists were Roman Vintonov, founder of Toronto Television, and Bohdan Logvynenko,founder of Ukrainer project.

The amount of reward for the winner is 100 thousand hryvnias.

Among the criteria for nominating candidates: Among the criteria for nominating candidates are  devotion to principles and values of independent journalism, professionalism and competence, innovation, significant contribution in development of a particular genre or media environment at large, creation of materials leading to resolving or understanding of certain issues in the society and changes in the country.

The Georgy Gongadze Prize is an award for independent journalists established by the Ukrainian PEN in 2019 in partnership with the powered Kyiv Mohyla Business School Alumni Association and the Ukrainska Pravda.and the Ukrainska Pravda. The first winner of the award was the editor-in-chief of the online publication Historychna Pravda and the eponymous TV magazine on the Espresso TV channel, as well as the founder of the Museum of Archive of the Press Vakhtang Kipiani. .

The winner of the award is traditionally announced on the birthday of journalist Georgy Gongadze.

The award was established in 2019 by Ukrainian PEN in partnership with the powered KMBS Alumni platform and Ukrainian Pravda. Vakhtang Kipiani became the first winner of the Prize.