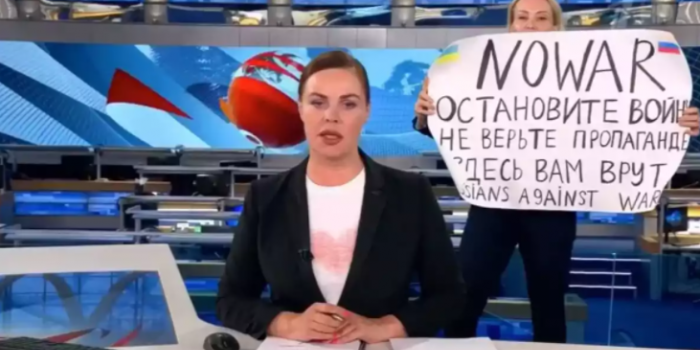 Maria Ovsyannikova, “journalist for Russian propaganda channel ORT, who became famous after the protest against the war in the news program, started campaign calling to lift sanctions against Russia in the European media. She announced this in her Instagram.

Ovsyannikova participated in the most influential broadcasting company in Italy, RAI. On the show "Che tempo che fa", she called on the West to lift anti-Russian sanctions. Ovsyannikova said that "Russians should not be collectively responsible for what is happening in Ukraine." According to the journalist, one person is to blame for this, this is Vladimir Putin.
In her speech, she focused on emotions, saying that her disabled mother could not buy medicine, and her daughter could not pay at school for lunch with a virtual card.

Ovsyannikova did not mention the Ukrainian children killed by the Russian army. Later, Ovsyannikova edited her Instagram post, removing all quotes about the lifting of anti-Russian sanctions and leaving only information about her speech on RAI.

Russians are spreading fake news about the deportation of potential conscripts, says CCD
Blogs
Collaborators' meaning juggling: how the minds of Ukrainians in the occupied parts of Zaporizhzhia oblast are being poisoned
"With Russia forever:" how "L/DPR" groups are preparing the region for "joining" RF
"I want this film to be presented at international trials:" the story of Lithuanian filmmaker's documentary, told by a Mariupol journalist
Western experts in the russian fog
Do you want to be first to learn about the new research of the Institute of Mass Information? Subscribe to the newsletter!