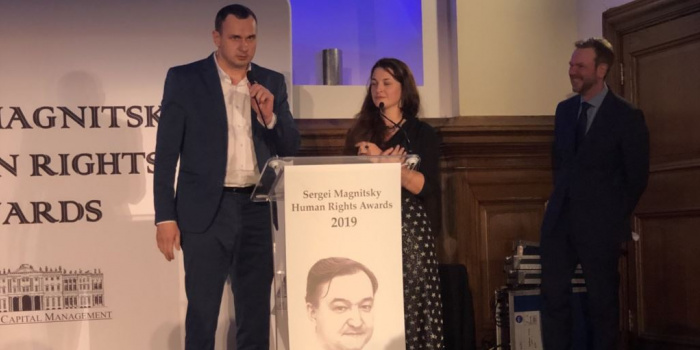 Oleg Sentsov, a Ukrainian filmmaker and former political prisoner, has accepted the Sergei Magnitsky Human Rights Award during the ceremony in London, as Ukrinform reported.

The ceremony, traditionally held in London, was broadcast live on YouTube channel Hermitage Capital Management as Sergei Magnitsky worked at this investment fund, the Voice of America reports.

Sentsov received the award back in November last year, but the director could not accept it personally as he was in Russian prison on charges of preparing terrorist attacks in annexed Crimea.

“Oleg Sentsov here at the Magnitsky Awards to accept the prize he received in 2018 when he was still in a Russian prison, but couldn’t accept. So moving and wonderful to have him out and here to accept his award. Congratulations Oleg!” Bill Browder, the founder of Hermitage Capital Management and Sergei Magnitsky Human Rights Award posted on Twitter.

The Sergei Magnitsky Human Rights Award has been awarded for the merits in the field of journalistic investigations and human rights activities since 2015.

The Magnitsky Act, formally known as the Russia and Moldova Jackson–Vanik Repeal and Sergei Magnitsky Rule of Law Accountability Act of 2012, is a bipartisan bill passed by the U.S. Congress and signed into law by President Barack Obama in December 2012, intending to punish Russian officials responsible for the death of Russian tax accountant Sergei Magnitsky in a Moscow prison in 2009. Since 2016 the bill, which applies globally, authorizes the US government to sanction those who it sees as human rights offenders, freeze their assets, and ban them from entering the U.S.

Photo credits: Meghan McCain / Voice of America/ taken from the website of Ukrinform