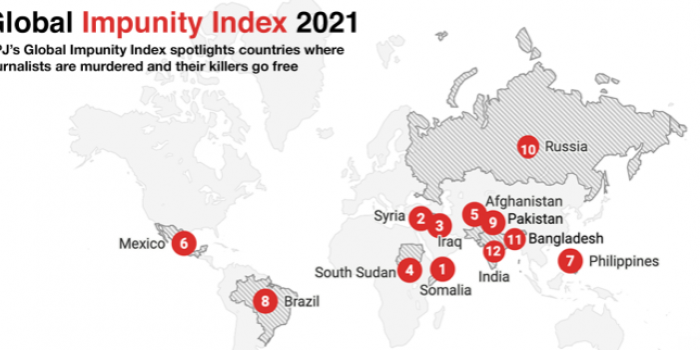 No one has been held to account in 81% of journalist murders during the last 10 years, the Committee to Protect Journalists (CPJ) 's 2021 Global Impunity Index has found.

Somalia remains the world’s worst country for unsolved killings of journalists, according to CPJ’s annual Global Impunity Index, which spotlights countries where members of the press are singled out for murder and the perpetrators go free. 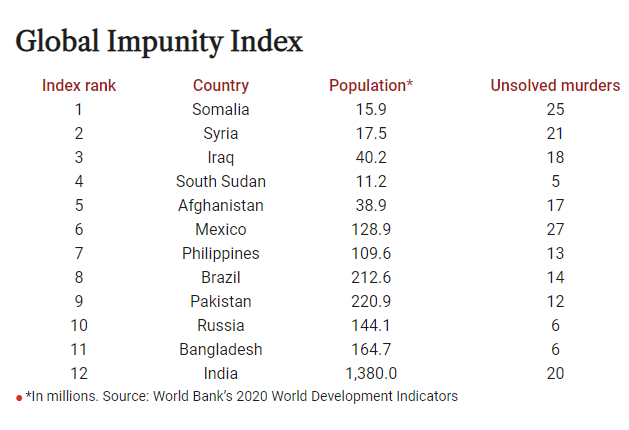 The index showed little change from a year earlier, with Syria, Iraq, and South Sudan, in that order, again coming in behind Somalia to occupy the worst four spots on the list, as conflict, political instability, and weak judicial mechanisms perpetuate a cycle of violence against journalists.

However, the latest data – which covers the period September 1, 2011, to August 31, 2021 – does not fully reflect the increased danger facing journalists in Afghanistan. Afghanistan ranked fifth, as it had in the previous two years. While the country’s spot on the index did not change, the situation on the ground for reporters deteriorated dramatically in 2021 as the Taliban took control in mid-August amid the withdrawal of U.S. and coalition forces and the flight of President Ashraf Ghani. Hundreds of journalists fled the country because they feared the Taliban’s brutal record on press freedom and what its rule could mean for journalist safety.

Justice for the 17 journalists murdered in Afghanistan in the 10-year index period was already elusive, and impunity for killers there may now become as entrenched as it is in Somalia and other nations atop the index. Afghanistan’s judicial system is collapsing, with reports from Afghanistan saying that courts are closed, lawyers are fleeing the country, and female judges have been forced into hiding. In addition, Taliban leaders appear even less likely than Afghanistan’s previous government to respond to local and international calls to end the country’s culture of impunity for crimes against journalists.

Promises made by the Taliban’s leadership to protect press freedom rang hollow within days of the takeover as its fighters carried out scores of violations against media workers, including beatings and arbitrary detentions. And given that at least two of the five journalists murdered in 2020 – Radio Azadi reporter Elyas Dayee and freelancer Rahmatullah Nikzad – had received threats from the Taliban prior to their deaths, there seems little chance that Afghanistan’s new Taliban government will seek out the killers.

Afghan journalists also remain at risk of being targeted by Islamic State militants. The group claimed responsibility for an April 2018 suicide bomb attack targeting the media that killed at least nine journalists, as well as the retaliatory murders of journalists such as Malalai Maiwand in late 2020. In the weeks after the Taliban’s August 2021 takeover, ISIS-K, the Islamic State’s local affiliate, said it was behind a series of deadly attacks – including one at Kabul airport and others targeting the Taliban.

During the 10-year index period – a tumultuous time that includes Syria’s civil war, widespread protests against Arab governments, and attacks against media workers by extremist groups and organized crime syndicates – 278 journalists were murdered for their work worldwide. In 226 of those cases, or 81%, CPJ recorded complete impunity, meaning no one has been convicted in connection with the crime. For the previous index period (September 1, 2010, to August 31, 2020), CPJ found that 83% of journalist murders were unsolved, continuing a recent trend of incremental progress in solving cases. In “The Road to Justice,” a 2014 examination of the causes of impunity in journalist murders and possible solutions, CPJ found that the killers went free in nine out of 10 cases between 2004 and 2013.

Illustrating the endemic nature of this lack of accountability, all 12 of the countries on the index have featured multiple times since CPJ first ranked the data in 2008, and seven have appeared every year.

Mexico holds the sixth spot on the index for the second straight year. Despite key convictions in the murders of journalists Javier Valdez Cárdenas and Miroslava Breach Velducea in 2020 and 2021, the media continue to be targeted at an alarming rate. As of August 31, CPJ research found that at least three journalists were murdered in Mexico for their work with complete impunity in 2021; four suffered that fate in 2020, second only to the number murdered in Afghanistan.

Globally in 2020, at least 22 journalists were singled out for murder in retaliation for their work, more than double the total for 2019. For 2021, the number of murders is tracking closely to last year’s, but political volatility in Afghanistan and other high-risk nations makes the final 2021 total difficult to predict.

The year 2021 also saw sentencings or positive developments in two other high-profile murder cases, involving countries not ranked on the index. In Malta, businessman Yorgen Fenech was indicted in August for his alleged role in the 2017 murder of investigative journalist Daphne Caruana Galizia, a move that Corrine Vella, the journalist’s sister, called “a turning point in the pursuit of justice.” In February, one of the alleged killers pleaded guilty and was sentenced to 15 years in prison for Caruana Galizia’s murder.

And in Slovakia in June, the Supreme Court canceled the acquittals of two defendants in the 2018 murder of investigative reporter Ján Kuciak and his fiancée, reversing a setback in the pursuit of justice for another journalist who – like Caruana Galizia – was killed for his reporting on corruption in the European Union.