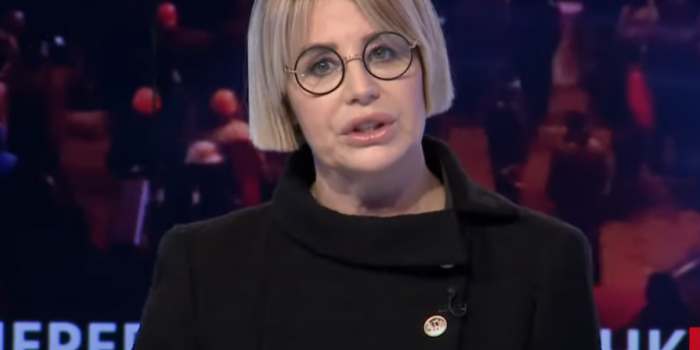 The National Council of Television and Radio Broadcasting seized the SBU due to Hanna Herman's statements on ZIK TV channel, in which she denied the existence of external aggression against Ukraine and accused the participants of the Revolution of Dignity of carrying out a coup d'etat. Maksym Opoprienko, a member of the National watchdog, said it at the meeting of the agency on January 28 by, as Ukrinform reported.

"On live, Hanna Herman denied the fact of external aggression against Ukraine, calling it false, and calling on the Armed Forces of Ukraine to fight against the real enemy, a domestic terrorism. This call can be taken by a certain number of viewers of the TV channel as a call to national armed confrontation involving or with support of the Armed Forces of Ukraine and the admissibility of violence as such. Hanna Herman also called to unify against those who took part in the Revolution of Dignity, who, in her opinion, staged a coup d'etat, ” as Onopriyenko said.

He noted that such ideas with an obvious incitement to national hatred could also be seen as a call for violence and national confrontation, which threatened national security.

"Sothis is in the interests of protecting the national information space, as well as national security, the National Council appeals to the Security Service of Ukraine to take appropriate measures within its competence," Onoprienko said.

He noted that Herman's speech on ZIK TV channel caused a very animated discussion in society.

For his part, Deputy Chairman of the National Council Valentyn Koval noted that the combination of the words "civil war in the Eastern part of Ukraine" became more frequent on some channels.

"Unfortunately, the number of accusations of our Armed Forces that they did not act in the way those who spoke about it wished, has increased. I find it shameful. I believe that the use of such a narrative contradicts the understanding that we are Ukrainians, and it probably serves those who would like to see Ukraine not as we want to see it. That's why I urge everyone to pay more attention to these things, "Koval said.

He added at the same time that, unfortunately, even TV presenters are used to perceive such speeches as ordinary things.

"It's very inhumane, and it's definitely unprofessional," Koval said.

As IMI reported, on January 28, the National Council on Television and Radio Broadcasting scheduled an on-site inspection for Nash TV channel due to statements made on air by former MP from the “Party of Regions” Olena Bondarenko.

On January 19, the National Council on Television and Radio Broadcasting announced that it would monitor the Nash TV channel in connection with ideas voiced by Olena Bondarenko, a former MP from the Party of Regions, who called the Armed Forces of Ukraine "criminals."