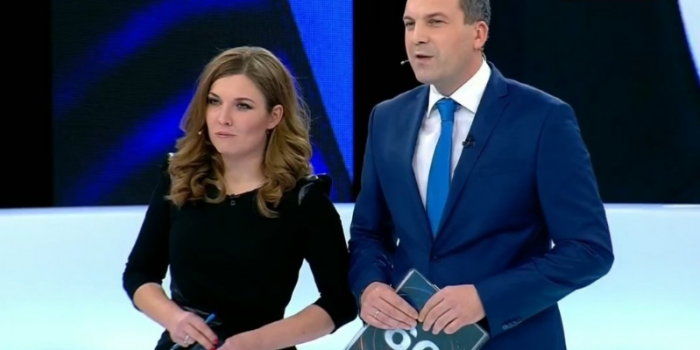 The National Agency for Countering Corruption has named five russian propagandists who have not been sanctioned by some foreign jurisdictions yet.

NACC notes that the propagandists should be convicted of crimes against humanity.

"For many years, the russians have been groomed for atrocities, rape, torture, and murder of Ukrainians. So that not a single soldier would doubt that firing at a car with 'children' written on it from a tank is russian heroism. That a russian soldier's honor is shooting Ukrainian civillians in the back while their hands are tied. The officials were not the only ones who worked on this in their closed offices; it was also an army of propagandists who should be convicted of crimes against humanity, but still have not even been sanctioned by a number of countries," the report says.

Among those is Margarita Simonyan, russian propagandist, editor-in-chief of the English-language news TV network RT (Russia Today), who has repeatedly called for a nuclear war in case russia loses the war with Ukraine. The USA and Japan have not imposed sanctions on her.

Margarita's husband is Tigran Keosayan. Actor and director, presenter of NTV channel's politics-themed propaganda TV show "International Sawmill with Tigran Keosayan." He proposes to "wash off the Ukrainians' conditioned brains," "hold a great trial against the Nazis in Ukraine," and warns that the russian federation will not limit itself to the war in Ukraine. He has not fallen under the sanctions of the USA, Canada, Japan, and New Zealand.

Olga Skabeeva, journalist of the state TV channel "rossiya-1," host of the "60 Minutes" political talk show who stated that the russian federation did not come to liberate Ukrainians and the occupation of such a country will surely take some time. She also stated that russia has long been at war not with Ukraine, but with NATO. Still not snactioned by the USA, Canada, Japan, and New Zealand.

Evgeniy Popov (Skabeeva's husband), unlike his wife, was included in the sanctions lists of all Ukraine's partners except for New Zealand. Despite the fact that Popov hosts the political talk show "60 Minutes," he was sanctioned primarily as a member of the State Duma, the NACC notes.

In addition, presenter of "rossiya 1" and "rossiya 24" channels Vladimir Solovyov, who declares that russia will not stop at Ukraine, and that Ukraine is "only an intermediate stage." In addition to the United States, Solovyov often threatens countries bordering the russian federation as well. Despite this, the USA and New Zealand have not yet imposed sanctions on the presenter.

Artem Sheinin is a russian propagandist and host of "Time Will Tell" the talk show on the Pervy Kanal. After russian troops partially occupied Mariupol, he came to the city to film propaganda videos with Ukrainian prisoners of war. The US, Australia, Canada, Japan, and New Zealand have not yet added Sheinin to their sanctions lists.