Mykolaiv and Dnipropetrovsk regions have the highest level of "dzhynsa"

Among regional media the highest levels of dzhynsa (illegally commissioned materials presented as unbiased presentation of information) recorded in Mykolaiv - 15% of printed media and in Dnepropetrovsk online media - 7%.

Experts of the Institute of Mass Information (IMI) had observed regional media in 10 oblasts during April-December 2016, for signs of news plant.

The lowest rates of biased articles recorded in media of Uzhhorod and Lviv - 2% of total printed materials and 1% on the Internet. 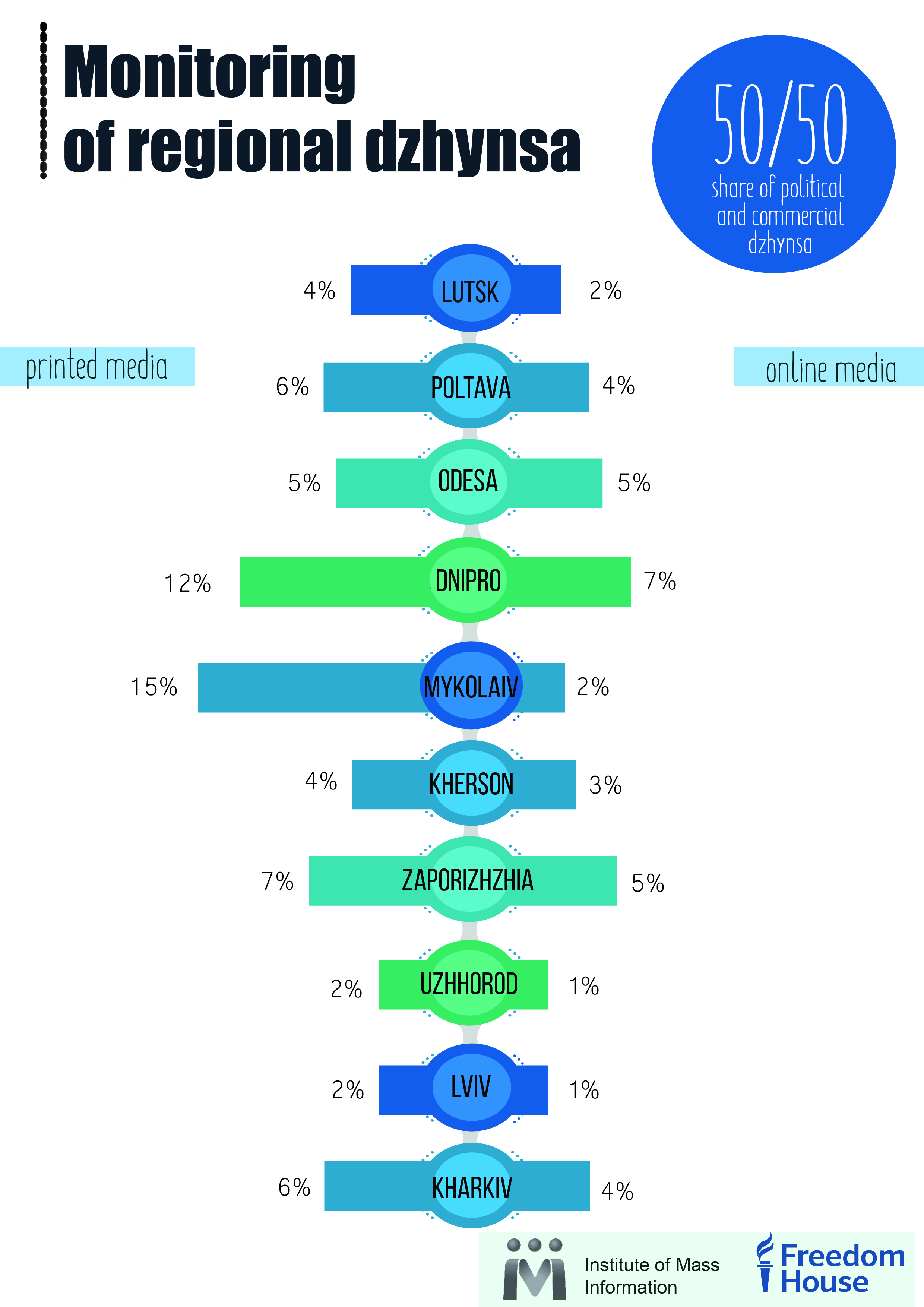 The main customers of dzhynsa are local politicians and nationwide political parties as the Opposition Bloc, the Radical Party, the Agrarian Party of Ukraine, "Nash Krai", "UKROP", "Vidrodzhennia".

Dzhynsa which is coming from the Opposition bloc prevails in the southern (Odesa, Mykolaiv, Kherson) and eastern (Kharkiv, Dnipro, Zaporizhia) regions. Meantime dzhynsa from the Agrarian Party of Ukraine and "UKROP" is dominating at the western regions. Although the Radical Party of Oleh Lyashko dzhynsa is outnumbered by the Opposition Bloc, it is presented in every studied region. There are political forces unique to certain regions - the political party "Smart Power" in Zaporizhia and "Novy Chas" in Lviv.

Co-relation of political and commercial dzhynsa, both online and printed media - 50% to 50% (average across all regions for the last nine months).

Political dzhynsa prevails over commercial in Zaporizhia newspapers - 59% of political bias materials, in Uzhgorod - 75%, in Kharkiv - 56%, in Kherson - 63% and in Dnipro - 55%. The monitoring of online media showed that political dzhynsa dominates in Mykolaiv region - 58%, Lutsk - 65%, Poltava and Kherson - 80%.

Commercial clinics, shops and banks are prevailing among business customers of dzhynsa. There is a great number of dzhynsa about Zaporizhstal & psychics in Zaporizhia.

Two popular printed and two popular online MM in ten regions of Ukraine - Zaporizhia, Dnipro, Odesa, Kharkiv, Kherson, Mykolaiv, Poltava, Uzhhorod, Lviv and Volyn regions were analyzed in the study. Monitoring was conducted every second week during last nine months, from April to December 2016. Experts were analyzing all the material that went on RSS news feeds online, and all published materials of weekly newspapers during the week.

The dzhynsa monitoring was conducted by IMI experts within the framework of the "Network media observers" project, which IMI performs with the supported from Freedom House and the Foreign Ministry of Norway.

Dzhynsa - is a journalistic material, or material of press services, aimed at improving or creating a positive image of political parties, individual politicians or people, brands or certain goods, government agencies and charitable foundations and religious organizations. People doesn't take this kind of material as an advertising because it is an unusual way to read commercial.