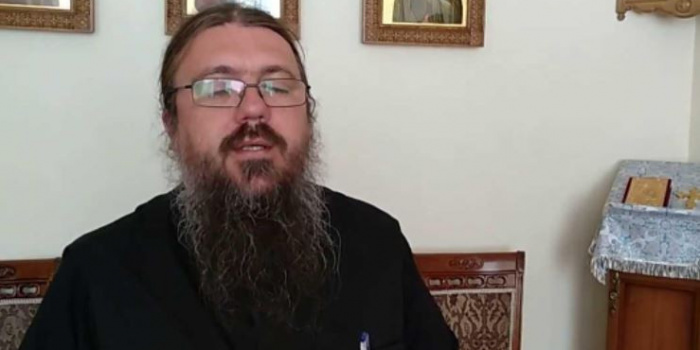 On Easter eve, Secretary-Archimandrite of the Chernivtsi-Bukovyna Eparchy (Moscow Patriarchate) Mykyta Storozhuk threatened to wage war against Serhiy Zaraisky, a journalist and editor of the BookInfo information portal, BookInfо reports.

During a phone conversation, Storozhuk tried to provoke the journalist, demanded to meet him and asked where the portal's editorial office was located. When he heard a refusal again, he became angry and "declared war" on Serhiy Zaraisky.

The phone call, in particular, was preceded by a post on the BookInfo portal. "The day before the war, the Chernivtsi-Bukovyna eparchy hosted a ruscist propagandist and 'enemy of Nazis' Sergei Mudrov. There was also talk of Osachuk." The article, in particular, refers to an interview that Storozhuk gave to a pro-russian Belarusian propagandist.

In view of what Storozhuk had said during the phone call, Serhiy Zarayskyi publicly appealed to the Security Service of Ukraine to consider these threats as a direct interference with the journalist's professional activity and to inform BookInfo about the measures taken.

In a comment to IMI representative, BookInfo editor Serhiy Zaraiskyi said that Storozhuk was attempting a kind of provocation.

"The call was preceded by a series of publications on the portal, mostly reposts. Personally, I do not know Nikita Storozhuk, but I know that he is a very odious figure of the Chernivtsi-Bukovyna Eparchy of the Moscow Patriarchate. He is a conflict-prone man, constantly at war with journalists. Our conversation lasted 15 minutes. During this time, he tried to convince me 10 times that we should definitely meet after the holidays. I flatly refused, telling him that I was not going to meet with an adherent of the Kremlin church in Ukraine. So Storozhuk began to say that he was critical of the activities of the head of the Chernivtsi RSA, believed that Osachuk (Serhiy Osachuk, head of the Chernivtsi Regional State Administration. – Ed.) was failing in his duties, and that he had a lot of information to share with me. He wanted to agree to a meeting and somehow make me curious. When I refused again, Storozhuk realized that the provocation was not successful and began to lose his temper. It was obvious from the tone of the conversation, the violent screaming. At the end of the conversation, Storozhuk said that he was declaring war on me, and hung up," said Serhiy Zaraysky.

The journalist notes that he would not have taken threats so seriously if it wasn't for the war, the role of the Moscow Patriarchate in Bukovyna, and possible provocations on their part.

The journalist also said that since the beginning of the full-scale war, he had received two phone calls from russian numbers, with the people calling offering him to cooperate and pressuring him, noting that they knew where his family lived.

"I also informed the SSU about this. In the conversation I was offered cooperation. They said: 'Well, you understand that everything is going to be as it should be. We will come, and it is better for us to be friends. Let's cooperate,' etc. I told them to go after the russian warship. But I was a little annoyed by these conversations because they said they knew where my family and relatives lived. So I consider Storozhuk's call in the same context. They know all pro-Ukrainian journalists, activists, and public opinion leaders well and are looking for opportunities for psychological pressure," Zaraysky noted.