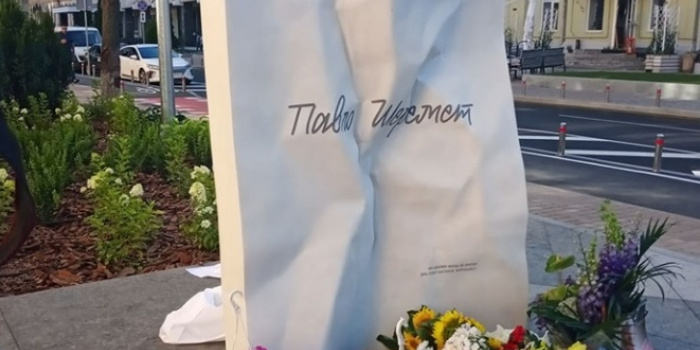 A monument commemorating journalist Pavel Sheremet, a Belarusian-born Russian citizen who had made Kyiv his permanent home, has been unveiled in the Ukrainian capital to commemorate the fourth anniversary of his killing, as Radio Free Europe/RAdio Liberty reported.

Sheremet, who worked for the online newspaper Ukrayinska Pravda, was leaving his apartment on July 20, 2016, to head to the studio where he hosted a morning radio program when an improvised explosive device planted under his vehicle exploded, killing him.

The monument, by Ukrainian sculptor Nazar Bilyk, depicts a large creased sheet of paper with Sheremet's name inscribed on it.

Sheremet's friends, colleagues, other journalists, and Kyiv residents attended the July 20 ceremony in the capital. Hennadiy Chyzhykov, the head of Ukraine's Chamber of Commerce and Industry, who introduced himself as Sheremet's friend, described him as "a man with a big heart, for whom someone else's pain was a pain of his own."

Chyzhykov expressed hope that those responsible for Sheremet's killing would be brought to justice.

Sheremet's killing underscored concerns of a climate of impunity for attacks on journalists and others who challenge the authorities, while the government has faced persistent criticism over a perceived lack of progress in solving the case.

Vladyslav and Inna Hryshchenko, a married couple, who were suspected in another unrelated case, have been declared persons of interest in the case.

All five took part in military operations in different capacities in Ukraine's east, where government forces are fighting against Russia-backed separatists.

The Interior Ministry and the National Police said in December that the group's goal was "to destabilize the political and social situation in Ukraine" by killing Sheremet.

In January, Ukraine's Prosecutor-General's Office said additional evidence was needed for the case to go to trial.

Sheremet's mother, Lyudmila Sheremet, told RFE/RL in December that she does not know whether the suspects are guilty or not but that she is afraid "that innocent people may be hurt" as officials try to show they're making headway in the case.