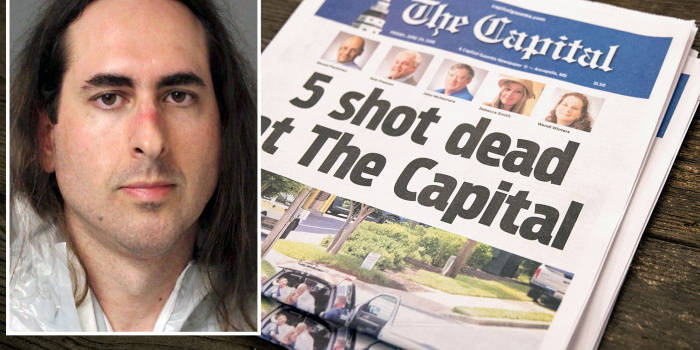 A man who killed five employees of Maryland's Capital Gazette newspaper in 2018 was sentenced Tuesday to spend the rest of his life in jail, prosecutors say, as CNN reported.

Jarrod Ramos was sentenced to five life sentences without parole, plus one life sentence, plus 345 years, according to Anne Arundel County State's Attorney spokesperson Tia Lewis.

All sentences will run consecutively, the state's attorney's office said.
Ramos walked into the Capital Gazette offices in Annapolis on June 28, 2018, and opened fire, killing five staffers. Two others were injured. A jury on July 15 of this year found that Ramos was criminally responsible for the attack, rejecting his plea of insanity.
One of the slain staffers, sports journalist John McNamara, was about to finish his fourth book when he was killed, and had been looking forward to retirement in about three years, his widow said in prepared remarks for Tuesday's sentencing hearing, according to the Capital Gazette.
The widow, Andrea Chamblee, wrote she felt like she was "surrounded by a river full of gasping, flailing people, destroyed by a gun violence, floundering until we each realized in our own time that the only way up and out was boosting everyone who was kicking and drowning to the top together," according to the newspaper."The real victim impact is that he's gone when he deserved to be here," Chamblee's prepared remarks read. "He deserved to enjoy seeing his recognition, to enjoy this time in his life, and I was so hoping to see it and experience it with him, and pay him back for all the kindnesses that he gave to me. Now I never will."
Two of the six people who survived the shooting and more than a dozen family members spoke Tuesday morning in court, the Washington Post reported. They included Selene San Felice, a reporter who hid under a desk during the attack.
"There were days I wondered why I lived or if I should live at all," she said, according to the Post. "I live to spread the truth."
"We will press on."
One of the daughters of slain staffer Wendi Winters told reporters outside the courthouse that the sentencing "brings us solace that the person that took her from us will never breathe freedom again."
"We ran out of time with our mother. We lost the storyteller of our family, and as a community we lost the storyteller for everyone that is an Annapolitan," Montana Winters Geimer said.
Montana's sister, Summerleigh Winters Geimer, was 20 when her mother was killed.
"She will never see me fall in love, get married, have babies; she didn't see me graduate college. My mom is missing out on every big event in my life. But I'm here for this big event in her afterlife, and Wendi was here with us," Summerleigh said outside court.

Authorities had said Ramos held a grudge against the newspaper. Court documents showed Ramos filed a defamation suit in 2012 against the paper and a reporter over a 2011 article that detailed his guilty plea in a harassment case. A judge threw out that lawsuit, and an appeals judge in 2015 upheld that ruling.
Anne Colt Leitess, state's attorney for Anne Arundel County and the lead prosecutor on the murder case, told reporters that justice was served at Tuesday's sentencing.
"I think it became very clear that this case was not about the defendant ... somehow (being) wronged by the Capital Gazette -- but that he exploited his lawsuit, and his losing of the lawsuit, and killed innocent people just to feel better about himself," the prosecutor said.
"And the jury saw through that, and the judge saw through it today" during sentencing, she said.
Those killed were McNamara, 56; Wendi Winters, 65; Gerald Fischman, 61; Rob Hiaasen, 59; and Rebecca Smith, 34.

Ramos had pleaded guilty but not criminally responsible

Ramos had pleaded guilty but not criminally responsible in October 2019 to 23 counts, including murder, setting up this year's trial, at which a jury was asked to determine his mental state at the time of the shooting.
The trial began in late June following delays for a variety of reasons, including Covid-19, the Capital Gazette reported. The jury needed less than two hours to reach its verdict.
Heading into sentencing, Ramos faced five life sentences without the possibility of parole, plus one additional life sentence for attempted murder as well as lengthy sentences for gun charges.
CNN
Liked the article?
Help us be even more cool!
Other news