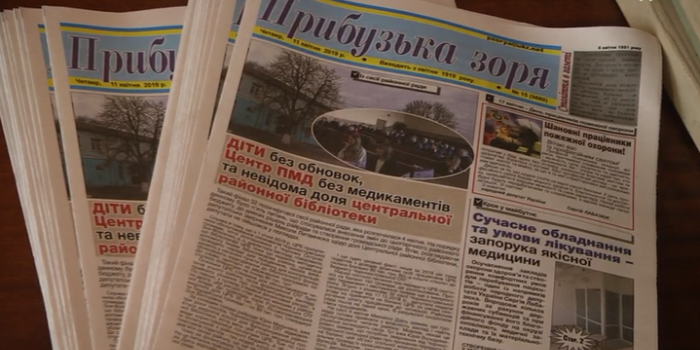 "Prybuzka Zorya" newspaper (Khmelnytsky region) temporarily stopped publishing due to the difficult financial situation. This was reported by the editor, Svitlana Volkova, in the newspaper's last edition, issued in late June.

"Many legal, financial, material, and other issues have accumulated due to the military aggression. However, the most important of them, for every Ukrainian, is only one thing – when will the war end, when will our victory come. In view of the extremely difficult financial situation that has befallen the Prybuzka Zorya Newspaper Editorial Board LLC and very low subscription revenues, we made the decision to suspend the newspaper's publication until the end of 2022," the editor's statement reads.

Volkova also named six reasons that contributed to this decision. In particular, the denationalization of printed publications, Ukrposhta's decision to introduce mobile post offices and downsize stationary ones along with their staff, the "newspaper workers' lost battle" for efficiency with the Internet. Also, these are the prices for delivery, paper, and printing, a ban on subletting leased premises. And the sixth reason is the war.

Instead, Svitlana Volkova noted, all subscribers who have pre-paid for the publication until the end of the year will receive "Simeyna Hazeta" in accordance with the agreement between LLC "Prybuzka Zorya Newspaper EB" and LLC "E Publishing House."

"Prybuzka Zorya" is a printed district newspaper that has changed its name several times, but preserved the publication's history and the history of villages and towns of the present Khmelnytsky district on its paper pages, without switching to online format. It was impossible to find a single copy of "Prybuzka Zorya" being sold freely. This newspaper was only available through pre-paid subscription.