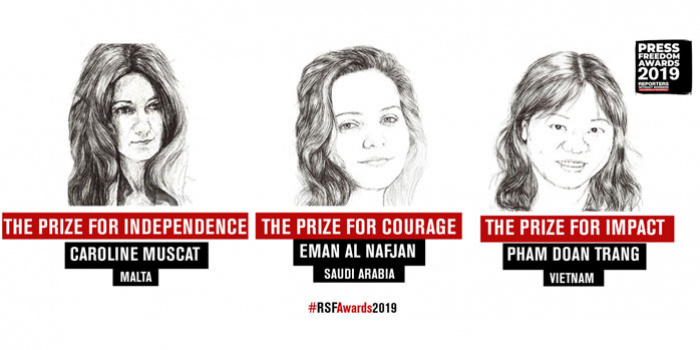 Reporters Without Borders (RSF) awarded its 2019 Press Freedom Prize today (12 September) to Saudi journalist Eman al Nafjan, Vietnamese journalist Pham Doan Trang and Maltese journalist Caroline Muscat, at a ceremony held for the first time in Berlin, as it is reported at the RSF site.

The Prize for Courage, which is given to journalists, media or NGOs who demonstrate courage in the practice, defence or promotion of journalism, was awarded to Saudi journalist.

Eman al Nafjan. The founder of the SaudiWoman.me website and author of many articles in the international media including the Guardian and New York Times, Eman al Nafjan spearheaded the Saudi women’s campaign for the right to drive and against Saudi Arabia’s oppressive male guardianship system. Arrested along with other women’s rights activists in May 2018, she was freed conditionally on 28 March 2019. According to the Saudi media, she is accused of endangering “national security,” maintaining “suspicious contacts with foreign entities” and of being a “traitor,” for which she could be jailed for up to 20 years.

The Prize for Impact, which is given to journalists whose work has led to concrete improvements in journalistic freedom, independence and pluralism, or to an increase in awareness of these matters, was awarded to Vietnamese journalist and blogger Pham Doan Trang. She is the founder of Luât Khoa, an online magazine that specializes in providing information about legal issues, and she edits another, thevietnamese, which also helps Vietnamese citizens to defend their rights and resist the Communist Party’s arbitrary rule. The author of many books including one defending the rights of Vietnam’s LGBT communities, she has been beaten by the police because of her work and was detained arbitrarily twice for several days in 2018.

The Prize for Independence, awarded to journalists for resisting financial, political, economic or religious pressure, went to Malta’s Caroline Muscat. After fellow Maltese journalist Daphne Caruana Galizia was murdered in October 2017, she helped to create The Shift News, an independent investigative news website committed to combatting corruption and defending press freedom in Malta. In this small island nation where most media outlets are subservient to the government, she has exposed many cases of corruption implicating local politicians. Although the repeated target of gag suits, The Shift News has refused to comply with content take-down demands from Henley & Partners, a British firm that advises governments on residence and citizenship-by-investment policy. She received an award from the European Commission in 2015 for her journalism,

“Every year, award-winners are unable to attend because the leaders of their countries prevent them,” RSF Secretary-General Christophe Deloire said. “Two of this year’s three laureates have been unable to collect their awards personally, just as Berlin journalist Carl von Ossietzky was prevented from going to Oslo in 1936 to receive his Nobel Peace Prize, and Chinese freedom defender Liu Xiaobo was unable to go to Oslo in 2010, six years afterbeing prevented from collecting his Reporters Without Borders Press Freedom Prize. These journalists, who should be honoured in their countries, are denied the freedom to travel and often their freedom, period. But their commitment transcends borders without the dictators being able to do anything to prevent it.”