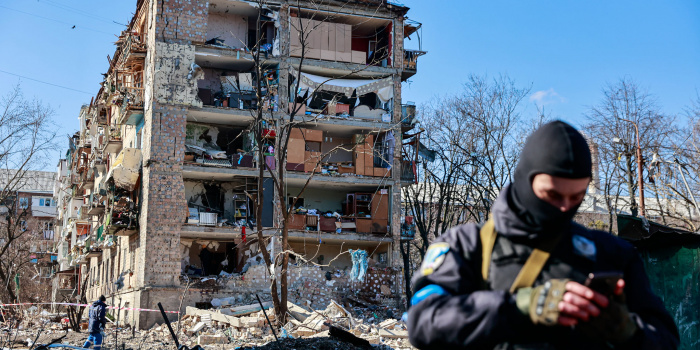 To President of Ukraine Volodymyr Zelenskyy, the Ministry of Defense, the State Security Service, the General Staff of the Armed Forces, the Foreign Ministry of Ukraine

We, Ukrainian and foreign journalists, as well as media organizations and NGOs, demand that all measures be taken immediately to end the harassment of journalists who are Ukraine's greatest allies in this war. We also demand to involve qualified technical specialists and to develop transparent rules for the coverage of Russian shelling.

The contribution of journalists is extremely valuable for Ukraine. It is through their work that the world and the citizens of Ukraine learn about Russia's crimes, about the humanitarian catastrophe they caused, and about the destruction and victims of the Russian shelling. It is thanks to the free and unhindered work of foreign journalists that the world now supports Ukraine. Instead, the Russian dictatorship is making every effort to exterminate independent journalists and newsrooms.

Due to systematic unsubstantiated statements by officials and official structures, the society began to see betrayal and "adjustment of fire" in the work of all journalists without exception, which is extremely harmful for Ukraine.

We call for immediate resolution of key issues which are necessary to improve the situation with the work of journalists in Ukraine.

1. Settle the issue of accreditation of journalists from the Ministry of Defense. Explain to the Territorial Defense Units and the Security Service of Ukraine on the ground what this accreditation means. If journalists are required to provide additional documents to confirm the MoD's accreditation, indicate what these documents should be in order to remove questions to journalists.

2. Stop the practice of "manual mode" of journalists' access to filming locations. Army generals must solve combat tasks, not spend their precious time on micromanagement of film crews on the ground.

3. Involve technical specialists and finally resolve the issue of coverage of artillery and missile shelling and places of destruction. Allow journalists to work on the spot immediately after the shelling, but, if necessary, impose an embargo on the publication of information after the shelling. The decision to not cover the shelling should be reasoned by experts and transparent.

4. Settle issues related to the coverage of humanitarian aid distribution points, bomb shelters, the life of peaceful cities, etc. We remind you that information about these places is publicly available, and on the contrary, the authorities and activists ask the media to disseminate it to inform citizens.

We call on the parties to engage in dialogue and build transparent rules for the work of journalists in Ukraine. In order for Ukraine to win, it is very important to build the most favorable conditions for the work of a free press, as much as possible in conditions of war.

The statement is open for signatures of journalists. To sign it, write to [email protected]

Oksana Romanyuk, Executive Director of the Institute of Mass Information

Yulia Fediv, Director of the Hromadske

Iryna Zemlyana, media expert and security trainer for journalists of the Institute of Mass Information

Danylo Pavlov, photographer and photo editor for Reportes and The Ukrainians

Illya Ponomarenko, correspondent on defense for The Kyiv Indelendent

Yuriy Gorbach, director of the Center of journalistic investigations “Force of Truth”

Oksana Petruk, deputy of director of “Force of Truth”

Valeriy Bolhan, president of the NGO “Center of public investigations”