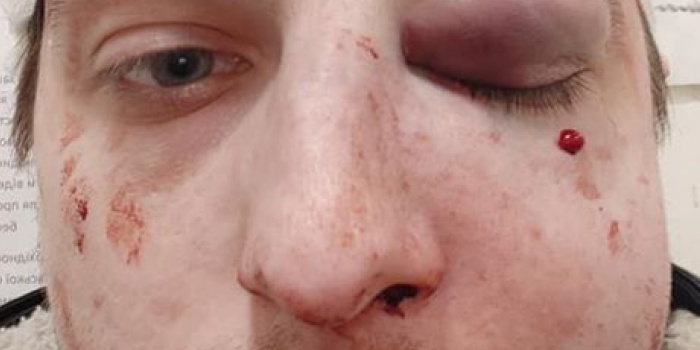 In Kyiv, on March 27, a group of teenagers beat journalist of the online edition Obozrevatel Roman Hrusha, as it was reported on Obozrevatel website.

He needs an urgent surgery, as he has four displaced facial fractures and several traumatic brain injuries.

The edition calls on all those who are indifferent to come to his help, because only for expensive implants it is necessary to pay 46 thousand UAH at once (around $1 600).

According to Roman Hrusha, the attack happened at 7:30 pm on Drahomanov Street in Darnytskyi district of Kyiv.

"I was attacked and beaten by three persons, unknown teenagers. What a crazy time we live. I was sitting on a bench by the porch. Three people came, aged from 16-18 or so. Two sat next to me, one stood by me. They asked if I had got a light, one of them immediately got a knife. I said I did not smoke. They started asking if I had money, what I was hiding in my pockets. I tried to get up, " the journalist told.

"I was immediately pushed to the bench, the one standing on top. They insulted, threatened me. I noticed that one person near the store was watching this situation. I saw that someone near the shop was observing me. I realized it was high time to act. I made a sudden jerk to stand up, and at once the blows rained down straight to my head. The guys had obviously done some sport, because they were beating hard and with accuracy. They seemed to try to catch up with me, but they saw that I ran to the store and decided to escape, "he added.

According to Roman, as he got to the store he asked the eye-witness to call the police, but the later ignored the request. The reaction of the store employee, where the journalist went for help, became even more frightening.

"I went into the store, my blood was spilling all around, I couldn't even call the ambulance because it had covered the whole phone. I asked the saleswoman to call the police and the ambulance. She said she didn't have any phone and I needed to go out, because I scared off the customers. I was just shocked. Later, she still got her phone and called the authorities, complaining about me, "said Hrusha.

As a result, the victim himself had to call emergency services. He was immediately hospitalized. He has to undergo several complicated surgeries and many new examinations.

On his Facebook page, Roman Hrusha reported that he had been attacked by armed robbers.

The journalist asked for help and indicated the numbers of his bank cards :

In an IMI commentary, Roman Hrusha said he did not associate the attack with his journalistic activity.

"I am not involved in anyhigh-profile cases, so I don't think I could have crossed the road to someone. In addition, the attackers themselves looked like people who wanted to have fun in such a way," he said.