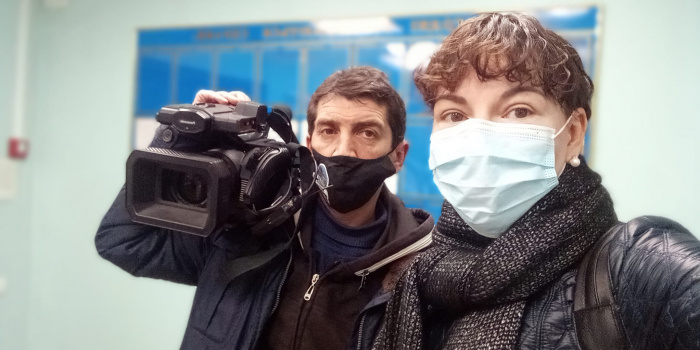 Freelance journalist Lyubov Velychko claimed that the court guards barred the way to the premises of the Holosiivskyi District Court of Kyiv to her and her colleagues from other media. Lyubov Velychko told IMI about it.

According to her, she came to cover the court hearing in the case of an illegal takeover.

The guards argued the denial of access was due to the order of the president of the court of justice imposing epidemiological restrictions during quarantine.

"I was not allowed to enter the courtroom behind the turnstile. The judicial officer referred to the court's order imposing epidemiological restrictions during quarantine. They say that only the parties to the case and their lawyers who had the right to attend the courtroom, ”she said.

Serhiy Semenov, a journalist with the Criminal Review newspaper (part of the Khmelnytsky media holding “33 Media”), also told IMI that he was denied access. According to him, the editorial office sent a request the day before for permission to attend the court hearing, but they did not receive a response.

"We indicated in the letter that we woukld comply with the rules of court proceedings and sanitary and epidemiological norms. But no answer we received. We arrived, submitted press card, but after the guard saw that we were journalists, he ran to the judge, and when he returned, he said that they were told to limit us and not let in. We were not even allowed to pass the turnstile, ”Semenov said.

Journalists called the police. However, Lyubov Velychko noted that even after the police arrived, the court guards refused to let her and Serhiy Semenov into the courtroom.

"Patrolmen said they had no right to tell the court what to do," the journalist said.

Velychko noted that the patrol "sided with the judiciary and did not want to hear arguments about the illegality of obstructing journalistic activities."

Patrolmen called an investigative task force. Lyubov Velychko and Serhiy Semenov are to file complaints of obstructing in their professional activity.

On December 31, the website of the Holosiivskyi District Court of Kyiv published an order to extend the quarantine restrictions in court until December 31, 2022.

According to the order, judicial security guards shall allow exclusively the participants in court hearings to the court premises.

IMI sent the request  for information to the court of justice interrogating, on the basis of which the law the journalists had been banned from court.

We recommend that you read the IMI material on "Publicity of the trial vs. Quarantine - legal analysis"