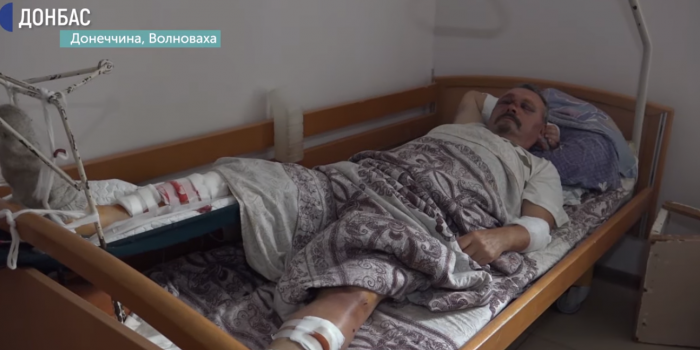 In Volnovakha (Donetsk region) on October 30, ыщьу unknown persons beat the journalist Volodymyr Grabovenko. As a result, he had a fracture of the bones of his right leg and right forearm, and several bruises on his head.

As Grabovenko told interviewed by the Public broadcaster, he was attacked by some unknown people near his home. The journalist was taken to Volnovakha Central District Hospital.

“I hear a knock on the gate, I ran out into the street. I look, half a brick is lying on the street near the yard, ran into the alley. I look, there was a car  and someone was nwalking around. I got a blow with a bat. I got up, shielded myself, they beat me on the arm, then on the leg, then they took the car and left, ” Grabovenko said.

According to Volodymyr Grabovenko, he is a former deputy of the Volnovakha district council, editor-in-chief of the newspaper "Narodovladdya pro vsikh I pro vse" (People’s rule about everyone and everything). He launched the newspaper about a year ago. According to him, he was engaged in some anti-corruption activities.

Serhiy Yashin, a journalist with the “Narodovladdya” newspaper, told the Public broadcaster that the attack was related to his journalistic activities.

"This is a local newspaper, non-profit, we arranged it at our own expense, we are investigating all the crimes that are taking place in our Volnovakha district," Yashin said.

The head of the trauma department Andriy Khadzhinov said that the patient would have leg surgery.

According to the doctor, Volodymyr Grabovenko's rehabilitation will last up to six months.

Investigator of the Volnovakha Police Department Stepan Uzbek said that the probe was ongoing under Part 4, Art. 296 (hooliganism).

The lawyer of the injured journalist, Oleksander Kudinov, does not agree with the qualification of the case.

"There are no signs of hooliganism here, because public order was not violated, but there are all signs of violence. Infliction of blows on the head provides some severe consequences, as death, so here the qualification must be under Art. 115 "Attempted murder", as well as Art. 345 with note 1 "Violence against a journalist", - as the lawyer said.