Journalist beaten in Kyiv region. He complained of police inaction 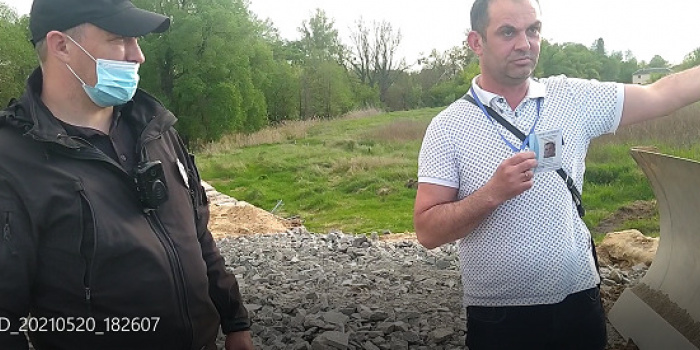 In the Kyiv region, near the village of Nemishayeve, some unknown persons beat Hennady Fimin, a special correspondent for the “Unified Service of Legal Aid” news agency, in plain view of police. Hennadiy Fimin became eye-witness of  an alleged illegal deforestation, as ZMINA human rights center reported on 6 of June.

Director of the news agency and lawyer Denis Osmolovsky clarified that the incident occurred on May 20, 2021 near a plot of land located near the Warsaw highway (sign of the town of Nemishayeve).

“The journalist was eye-witness of an offense related to illegal logging, damage and clearingof forest and young growth, which was accompanied by the operation of a vehicle (caterpillar tractor) without identification numbers. Road blockage was also damaged, ” he wrote.

According to the lawyer, the area where the work took place was not fenced, the workers did not have a passport of the construction site and permits for the right to deracination  of  greenery.

Reacting to Fimin's call, a police squad of Bucha District Police Department in the Kyiv region arrived at the scene. He introduced himself as a journalist, filed complaint about the offense, asked police officers to file it under an act and call an investigative task force to inspect the scene.  Fimin was accompanied with a member of the anti-terrorist operation, public figure Yevhen Timofeyev.

Later on, the elected official of Nemishayevsky settlement council Konstantin Kholodenko arrived to the scene who claimed that he was the co-owner of the land plot.

“Dissatisfied with the actions of Fimin H. A., Kholodenko K. P. began to threaten him with violence. After the threats were announced, KP Kholodenko left the specified place, ”as Osmolovsky wrote.

Due to the threats, the journalist had to call the police to send an investigative group to the scene. At the same time, several unknown persons in plain clothes arrived here. In plain view of police, they beat Hennady Fimin, as the lawyer said.

"One of the persons was punched several times in the head, from which Fimin H. A. lost consciousness, after which he was kicked in the head and torso," he said.

At the same time, according to the “Unified Service of Legal Aid”, police officers who witnessed the beating of the journalist did not intervene to stop the assailants.

"Recovering from the blows, Fimin asked the police to call medical services for emergency care, but they did not, " – as said Osmolovsky.

Fimin himself had to call medics. An ambulance took the journalist to the Kyiv Regional Clinical Hospital.

Lawyer Osmolovsky said that due to failure to perform one’s official duties by policemen of the Bucha District Police Department in Kyiv region, one could record a criminal offense under Part 2 of Article 345-1 of the Criminal Code "Threat or violence against a journalist ". Also, law enforcement officers did not take measures to stop and document administrative offenses of damage to forest plantations and roadblocks, he said.

On May 26, Hennadiy Fimin filed a criminal complaint under Article 345-1 of the Criminal Code with the Shevchenkivskyi Police Department of the State National Security Service in Kyiv.

Osmolovsky said the case of beating of a journalist and of police inaction was reported to the Main Directorate of the National Police in Kyiv region, the Interior Ministry, the Prosecutor General of Ukraine, the Council for Freedom of Speech and Protection of Journalists under the President of Ukraine, and the Advisory Council for Guarantees of Human Rights, the Committee of the Verkhovna Rada of Ukraine on Freedom of Speech, the Verkhovna Rada Commissioner for Human Rights, the Ministry of Veterans.

In a comment to “360 News”, the elected official Kholodenko confirmed that the parcel of land  where the incident occurred really belonged to him. A car wash station is being built in that territory.

According to him, the conversation with Fimin for some time was really high-pitched, at some point the deputy "took the journalist by the shoulders", but there were no threats towards the journalist.

Kholodenko also said that Fimin was allegedly drunk at the time of the incident. However, according to Osmolovsky, he does not drink alcohol. The website of the “Unified Service of Legal Aid” published scanned copies of medical documents, including the blood analysis of Fimin made at the hospital on May 20, 2021 for alcohol in his blood.

Osmolovsky's lawyer told ZMINA that they would seek for police registration of the case by applying to court. He will announce the results of the court hearing separately.

Hennady Fimin is an internally displaced person from Luhansk region, in 2014 he was enlisted as a volunteer in the Armed Forces, took part in hostilities during the anti-terrorist operation in 2014-2015, has a group II disability. Author of the book "Twilight Volunteer". As a journalist, he takes care of the protection of the rights and interests of combatants (ATO, OOS), internally displaced persons, as well as compliance with environmental legislation by public authorities and citizens.