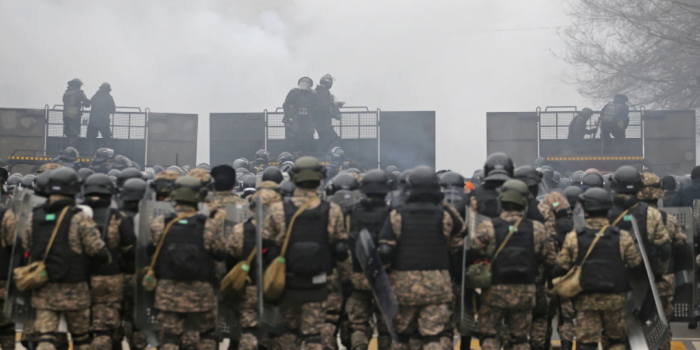 The Ukrainian human rights community is deeply concerned about the tense situation in Kazakhstan. In the light of fast-paced events, we call on the Kazakh authorities to stop violating their international human rights obligations in response to the protests and to make every effort to resolve the situation peacefully and build a dialogue with society.

The present-day developments came after peaceful protests against rising liquefied natural gas prices in Zhanaozen began to spread to other cities in the country. Tens of thousands of people joined the protests, and protesters made additional demands. They expressed widespread dissatisfaction with authoritarian government, economic and social inequality, lack of democratic processes and widespread corruption, which has led to a concentration of wealth within a small political and economic elite.

On January 5, 2022, in Almaty, clashes occurred between law enforcement agencies, security officials on the one hand, and protesters on the other. Some protesters seized government buildings and other state property, including Almaty airport. The government resigned. In his address, the president Kasim-Jomart Tokayev promised to take "the toughest possible" measures against the protesters. Later, the Kazakh authorities declared a state of emergency. By night-time, there were reports of shootings, explosions, arson and robbery in Almaty. President Tokayev enlisted the help of the Collective Security Treaty Organization (CSTO), a military alliance between the six post-Soviet states with the Russian Federation as a key player, to combat the threat he described as "terrorist." On the night of January 6, the government announced launching an anti-terrorist operation.

According to the country's Ministry of Health, 400 people were hospitalized as a result of the riots, and 62 people have been placed to intensive care. Dozens of police and protesters were killed in the clashes, police said. No exact number of injured and dead among the protesters is currently known. There are evidences of disproportionate use of force by law enforcement officers and major abuses of power. According to local human rights organizations, more than 2,000 people have been detained across the country so far. According to authorities, as of January 5, 200 people had been detained. According to local observers, detainees are denied access to lawyers and there are serious doubts about ensuring the right to an objective investigation and a fair trial.

Since yesterday (January 5th – n/tr), the access to the Internet - both wired and mobile- was periodically blocked. Some journalists were detained while performing one’s professional activity. Violations of the right to freedom of expression, freedom of information retrieval, freedom of opinion, association and freedom of peaceful assembly in Kazakhstan are a matter of serious concern.

According to recent reports, foreign troops from CSTO member states are being deployed in some cities in Kazakhstan, including Almaty, to quell protests. We consider the use of foreign troops to maintain the current power of Kazakhstan a foreign intervention, similar to the use of Warsaw Pact troops to suppress protests in Eastern European countries, which were under the control of the USSR in the second half of the twentieth century, in particular the suppression of the 1968 Prague Spring.

As the situation continues to evolve rapidly, we continue to keep a close eyeon its development. We support the calls of the representatives of the UN, the EU and the OSCE, other international institutions and foreign governments for restraint and a peaceful solution to the situation. We call on the protesters to refrain from illegal actions. We support the people of Kazakhstan in their quest for democratic transformation of their own state.

We call on the authorities of Kazakhstan to:

We call on the Government of Ukraine to: