Jeansa in online media. Monitoring of fourth quarter of 2021 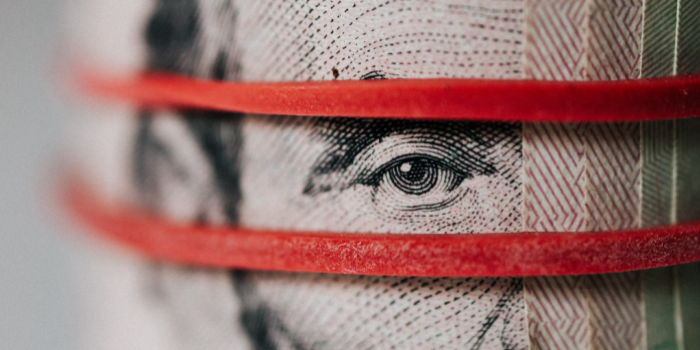 As of December 2021, the percent of jeansa in the Ukrainian online media increased by 11% compared to the third quarter of this year.

These are the results of a quarterly survey of the NGO "Institute of Mass Information", which covered the period from 15 to 19 November 2021 in 16 online media, the total sample was more than 20 thousand news *. 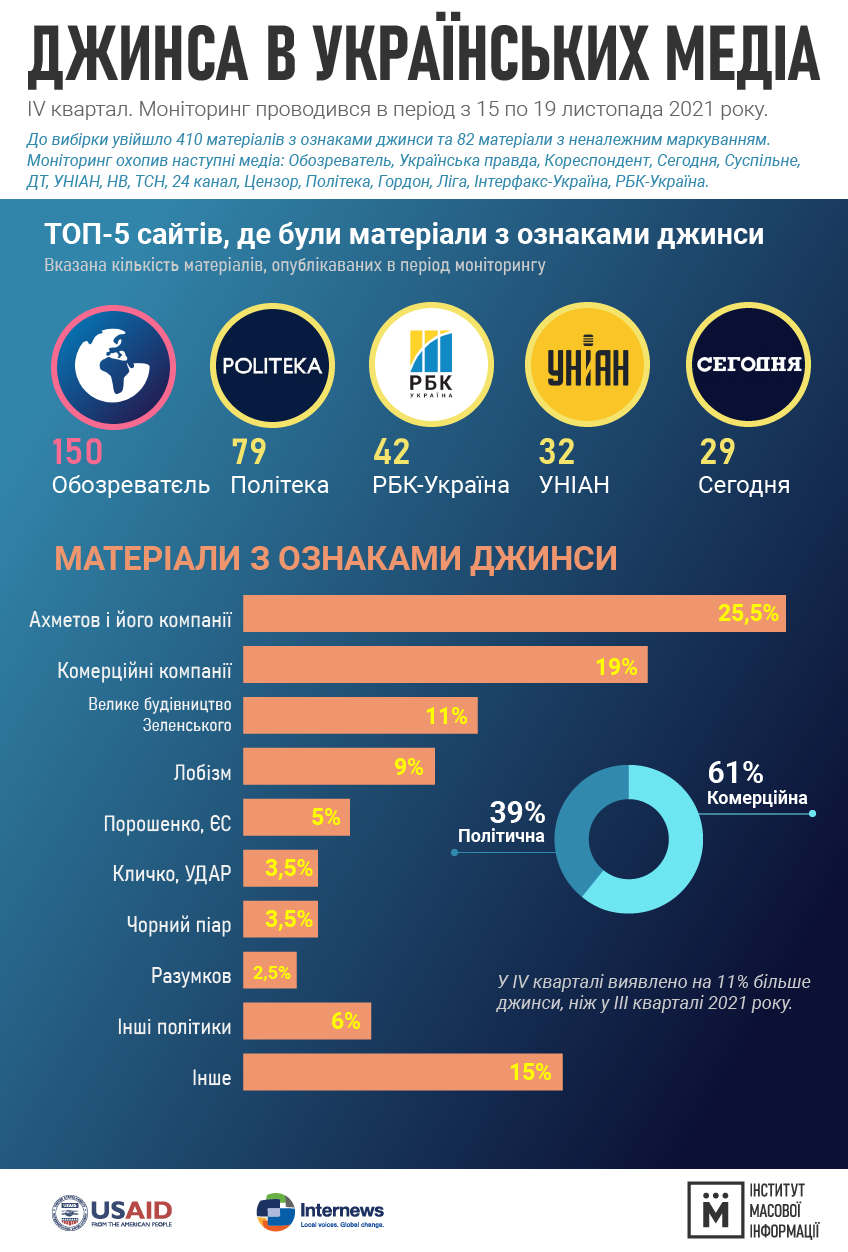 For the first time, commercial jeansa descended to second place, accounting for 19% of all ordered materials.

Most of the news with signs of a political order were focused on praising the significance of the President Zelensky's program "Great Construction". Many media outlets go on providing only complimentary texts on the issue without any analysis, often failing to demonstrate public importance for the national level and without sufficient background.

Most of the materials with improper labeling among all sites were found on the sites of NV (42), "24 channel" (15) and UNIAN (12). Improper labeling of materials was also recorded on the websites of Ukrainska Pravda, TSN, Segodnya and Gordon.

No jeansa was found on the sites Liga, Suspilne, Ukrayinska Pravda, Dzerkalo Tyzhdnya, NV and Korrespondent.

OVERVIEW OF MAIN CATEGORIES OF JEANSA

According to the monitoring results, a quarter of the materials with signs of the order fell on the materials posted in the interests of Rinat Akhmetov. Some of them were aimed at DTEK's war of words against the Office of the President and the Government for non-payment of "green bonds". According to Liga.net, on November 16, DTEK Renewables claimed not to have received any due from the Guaranteed Buyer from the funds raised from the placement of Ukrenergo's Eurobonds. At the same time, Oschadbank JSC transferred funds in full to all other companies. This provoked a great many of texts defending DTEK's stance:

According to Censor.net, a quarter of the UAH 19.3 billion of green tariff debts transferred to investors in renewable energy sources were supposed to be received by DTEK.

A number of experts and politicians were involved in supporting DTEK. For example, Andriy Zinchenko, a member of the board of the Association of Professional consumers of Ukraine:

It would be in the right manner, if Zelensky said that the coal he mentioned in his appeal was bought by DTEK - Yatsenyuk / Gordon

Minister of Finance of Ukraine in the government of Volodymyr Groysman Oleksandr Danyliuk:

Interestingly, in the fourth quarter, the number of image-building news on Akhmetov's companies increased slightly. For example, Metinvest has made efforts to combat the coronavirus:

Metinvest told how much company spent on anti-coronavirus activity / UNIAN

Metinvest also contributed to the construction of roads and supported social projects:

University, dormitory and sports facility: Metinvest will open its own university in Mariupol next year / UNIAN

The sites of Obozrevatel, 24 Channel, UNIAN, Gordon, Politeka and some others published content in favor of Akhmetov's companies.

Jeansa from commercial companies accounted for 19% of all ordered custom-made materials revealed by the monitoring.

Interestingly, almost 80% of news items with signs of ordering are now marked in the online media, although not quite properly (headings "Special Project", "Partner Content", "Company News"). It seems that the trend to label commercial materials was ignored only a few major online media that have not yet updated their editorial policies. Instead, the share of media that labeled commercial advertising in some way goes on growing.

For example, RBC-Ukraine placed the news on social and environmental projects of the ATB chain stores without any marks : " Instead of the announced 30 hectares of new forest plantations Corporation" ATB ", which operates national network of over 1.2 thousand of shops everywhere in Ukraine, donated 45 hectares of new forests in four regions to country on occasion of 30th anniversary of independence”.

However, the same material, but already on the UNIAN website, was published under the section “Hot topic”. This is one of the tag by which the edition is used to mark advertising. 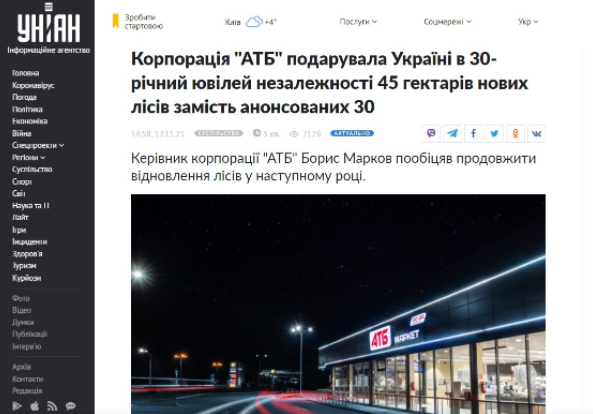 This evidences that this is the editorial office that decides whether to mark advertisements as such or to place jeansa content.

The similar things happened to the advertising of the Comfy store, when Obozrevatel placed jeansa under the guise of the editorial text: COMFY has launched a new urban format of stores. On Channel 24's website, the same material was marked as "Partner Material", and TSN's website marked it with "Company News". 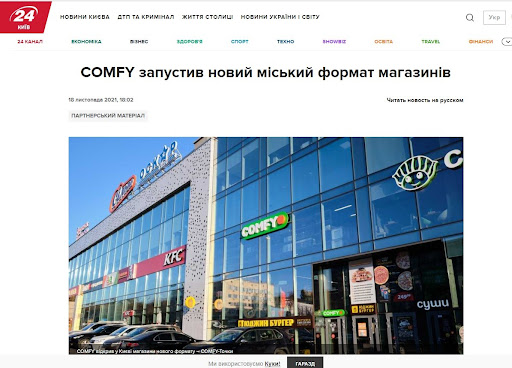 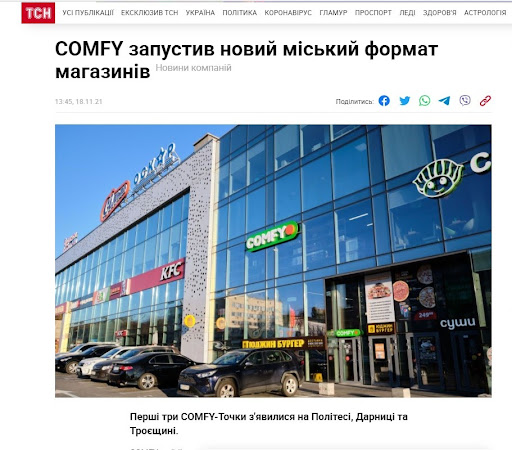 Most often, Ukrainian sites are labeling advertising with such tags as "Hot topic", "Company News", "Special Project", "Affiliate Project" and "Stance". More than 90% of the materials marked as such are commercial. Political materials are most often marked with the tag "Stance".

In addition to stores, custom materials were recorded in favor of pharmaceutical companies:

Kyivstar offers Superpowers: how to get more services and save money at the same time /Obozrevatel

Insurance companies, car manufacturers, banks, online casinos, food manufacturers, cosmetics and others placed materials in the media. Most of them were Ukrainian companies, which are representatives of medium and large businesses.

The third position in terms of the number of materials with signs of order is the third monitoring in a row is taken by the President Zelensky's program "Great Construction", in favor of which 11% of the total amount of all materials were detected during the monitoring.

News in favor of the "Great Construction" were recorded on the sites:

According to Zelensky's program, for the first time in 40 years, the route to Nikopol was completely repaired

In Khmelnytsky region, large-scale construction of sports and rehabilitation center has been completed

For the first time in 50 years, Zelensky's large construction is overhauling the H-23 highway in Dnipropetrovsk region

Large-scale construction on railway: next year Ukrainin railway will build 50 grain wagons on its own

Great construction overhauled the H-07 highway between Nedrigailov and Romny

Sports facility with a swimming pool is being completed in Nikopol, Dnipropetrovsk region

Great construction: repair of the R-17 highway leading from Bila Tserkva to Vinnytsia region has started in Kyiv region

Restoration of memorial: memorial was restored in Milovo

Great Construction: from Nedrigailov to Romny one can take high quality new road

Interestingly, almost all such materials are accompanied by a photo with a logo of the project. 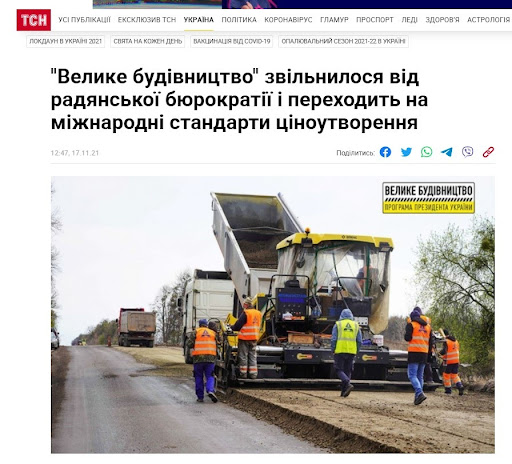 Some of the texts dealing with the "Great Construction" fail to demonstrate high importance for national media sites. This is, for example, news such as "Great construction: from Nedrigailov to Romny you can already drive a quality new road ", which is about repairing of a section of road 11.6 km long.

9% of the news with the attributes of the order were of a lobbying nature, aimed at promoting solutions that benefit large oligarchic groups.

According to Wikipedia, lobbying is the deliberate legal or illegal influence public authorities and local governments, as well as on their officials, directed at them on behalf of another person, organization or group. The purpose of lobbying is to consolidate their own interests or the interests of third parties (clients) in management decisions.

IMI experts note that this influence is actively exercised through the media.

We wrote above about the lobbying of DTEK's interests regarding the payment of debts for green investments.

During the monitoring period, the issue of freight car operation was lobbied for, in particular, the government's initiative to limit the service life of freight cars was criticized:

Car builders will earn on the write-off of cars by service life, and the economy will lose taxes - Sokolov  / Obozrevatel

EVA opposes to initiative to write off cars: the renewal of movable stock must be agreed with all market participants / Politeka

In addition, the media continues to lobby for a ban on scrap exports, which can also be attributed to the interests of oligarch Akhmetov:

The amount of news in favor of Petro Poroshenko and his party "European Solidarity" increased slightly (5% against 4% in the previous monitoring period).

Enemy at the door and the government denies threat: Poroshenko demands an immediate closed door meeting of faction leaders / Obozrevatel

Interestingly, some MPs from European Solidarity supported DTEK of Akhmetov, as we wrote above. Example:

Shmygal ordered not to pay debts to investors in Renewables on the European green loan, - Goncharenko / Obozrevatel

The latest wave of jeansa monitoring in the online media in 2021 showed that the oligarch Akhmetov is very arduously investing in promoting his own interests in the media. At the same time, the number of his commissioned materials is directly affected by the confrontation between him and the current government. For comparison: in the first quarter of 2021, Akhmetov's interests accounted for 8% of all materials with signs of ordering, and in the fourth they were already 25%.

As to the positive elements, we can note evoluation of labeling of advertising content, which Ukrainian commercial companies are ordering in the media. There are not many dinosaurs left on the market - online, which still place commercial jeansa without any labeling at all. At the same time, the customers themselves seem to be quite loyal to the labeling.

Among the differences in the monitoring of jeansa in the fourth quarter of 2021 is the emergence of a new customer :a former colleague of Zelensky, and now his opponent Dmytro Razumkov. And Vitaliy Klychko continues to actively promote himself, who in the first half of 2021 was not included in the ranking of customers at all.

The sample covers all the news in a row that appeared on the sites during the period (over 20 thousand news items).

This study was made possible by the support of the American people through the USAID Media Program in Ukraine, implemented by the international organization Internews Network. The content is under the sole responsibility of the Institute for Mass Information and does not necessarily reflect the views of USAID, the US Government or the Internews Network.