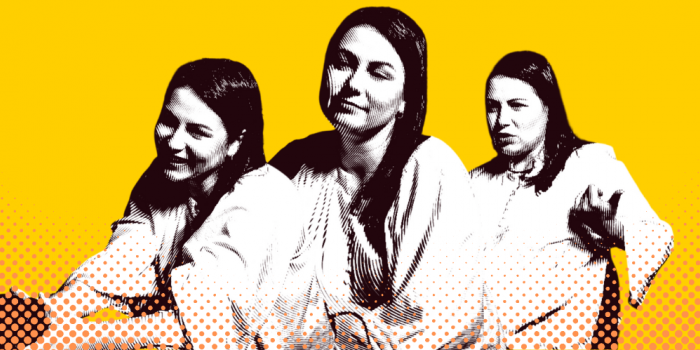 Iryna Zemlyana, IMI expert and activist, reported that Russia has submitted a request for her search to Interpol. She still keeps receiving threats and is in hiding after Russia's ambassador to Poland, Sergey Andreev, was doused with fake blood at a May 9 rally in Warsaw.

According to Iryna, after the incident, Russia opened a criminal case against her due to her allegedly attacking the ambassador on May 9, when she doused herself with beet juice in front of him.

"The Investigative Committee of the Russian Federation opened a criminal case against me and submitted a request to Interpol to search for me. Kadyrov (by God) recorded a video where he says that he will take revenge for the ambassador and will not just leave it be. Therefore, they are probably after me. We may think whatever of it, but this cold-blooded thug is capable of many things. Well, Putin (whatever would we do without him) said in one of his comments, what kind of EU is it, where you can't even bring flowers to the fallen soldiers' monument properly," Zemlyana wrote.

She also reported that Poland has also started an investigation into the attack on the Russian ambassador.

"It turned out that I was the only identified person who was there. By the way, after I started receiving tens of thousands of threats, I immediately went to the Warsaw police. I was told that the threat to my safety was very serious and that they would open a case and investigate the threats against me, provided me with security guards. Therefore, the news about them opening an investigation into the 'attack' on the ambassador was, to put it mildly, surprising," she wrote.

Iryna Zemlyana stressed that she did not douse the ambassador in anything and is not to blame for what happened.

"I spilled beetroot juice on myself (many videos and photos confirm this), and the ambassador was standing too close to me. I want to emphasize that, together with other Ukrainians and Poles, I was exercising my rights to freedom of expression and freedom of assembly, which are guaranteed to me by Articles 10 and 11 of the Convention on the Protection of Human Rights and Fundamental Freedoms. We had to show that wherever Russians appear, there is blood and Ukrainians die. The way this protest was expressed was inspired by the terrible crimes committed by the Russians in Ukraine. Why was the ambassador able to get so close to me? It is obvious that this is a question for the Polish police, and not for the protesters, who were exercising their legal right," said Zemlyana.

She is sure that Poland will conduct a proper investigation and will not make the victim and the aggressor switch places.

At the same time, Iryna Zemlyana reported that she is still in hiding, because she is still receiving threats.

"I received, and am still receiving (!), tens of thousands (!) of threats on all social media, messengers, by email and by phone. … I no longer sleep, I no longer feel hunger, and a lot of disturbing and very unpleasant things are happening to my emotional state. That's why I went to a psychiatrist and I highly recommend it to everyone who is faced with mood swings and other manifestations of trauma... I really miss the opportunity to communicate with people, to see my friends, and all the ordinary social things," she wrote.

She also added that she does not regret what happened and would have done the same again.

As reported by IMI, Iryna Zemlyana, an IMI expert and activist, was forced to leave Warsaw due to threats after the Russian ambassador to Poland Sergey Andreyev was doused with fake blood at a May 9 rally.