Independent Media Council urged not to stir up hatred towards refugees 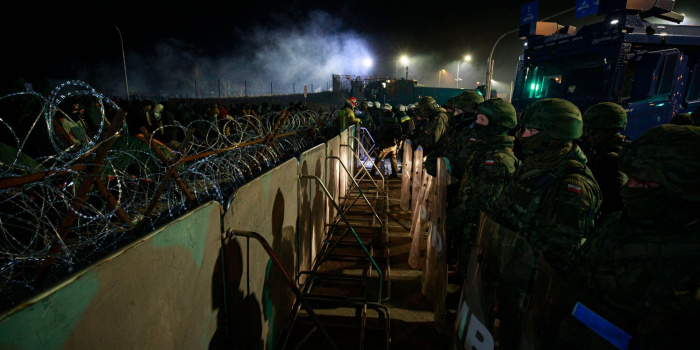 Ministry of Defense of Poland

The Independent Media Council reminds the media of the inadmissibility of xenophobia and incitement to hatred against refugees in the news relating what is going on the Belarus' border with neighboring countries, where the number of refugees is growing, most of whom came from the Middle East and Asia. This is stated in the statement of the IMC .

"Such international news inevitably provokes a violent reaction from both the media and politicians, and, unfortunately, this reaction is frequently excplicitely xenophobic and contrary to the basic principles of humanity. As the spread and incitement to xenophobic sentiments can have some real negative effects for Ukrainian society, the Independent Media Council considers this is to be its duty to remind the Ukrainian media of the ethical and legal standards they are obliged to adhere to when covering such sensitive topics, ”the statement said. .

In particular, the Independent Media Council reminds of:

-the Recommendation on the Prevention of Hate Speech and Stereotyping in the Media, which thoroughly defines the requirements for news and stories covering vulnerable groups or describes events that may cause public outcry or generate a wave of public disapproval of such groups. While covering the refugees from Belarus, the media should strictly avoid racism and Islamophobia, refrain from negative stereotyping of vulnerable groups, and avoid any biased coverage of developments saying the refugees will impose an excessive financial burden on Ukraine or poses a risk to national security. The media should remember that the issue of refugees and migrants is extremely sensitive and requires educating the audience in the spirit of respect for human rights, human dignity and other universal values. For this media, it is also important to remember the principles of ethical journalism and, in particular, the principle of humanity: journalism should not cause prejudice, and journalists should be aware of the impact and consequences of their reporting on others.

-Also the Independent Media Council also reminds of the case on discrimination and xenophobia while covering refugees in the town of Yahotyn, in which the council claimed its clear position stating this is inadmissible to allow any hate speech against vulnerable groups and the this is inadmissible to cover refugee shelter news as a significant threat to society, as this could raise a wave of violence and discrimination from audience. In conclusion in the Yahotyn case, the Independent Media Council was forced to state that most media coverage of such a vulnerable group as people forced to flee the persecution and horrors of war was characterized by elementary legal, political and cultural ignorance, the creation and imposing negative stereotypes, manipulations aimed at spreading xenophobia and sowing panic among the local population,and a striking lack of empathy for human suffering and respect for human rights values. Such an irresponsible behavior of the media is unacceptable not only in a UN member state and seeks to establish itself as an active and independent subject of international relations, not only in a country that has suffered from aggression and undeclared war, but also in any civilized society, which has not lost its humanity and respects human being, his life, rights and freedoms. The Independent Media Council hopes that this time the Ukrainian media will be able to avoid xenophobia and cruelty in covering this sensitive topic.

-The Independent Media Council emphasizes the imperative of an adequate and active coverage of information on the rights of refugees and migrants, taking into account all relevant requirements of international law, national law and ethical standards. This also applies to the understanding and use of terminology: "a migrant " means a person who is not a citizen of a country and has obtained a residence permit in its territory or plans to obtain such a permit, and "a refugee"- a person seeking asylum for fear of persecution is unable to obtain the protection of his or her nationality. (…)It’s important to cite opinion of cognizant experts of the matter of refugees to explain the circumpstances of every incident, it ‘s worth to appeal to human right organizations, officials of the international institutions, lawyers who are specialized in the

-As the issue of refugees is often the subject of primitive political speculation by both local and foreign politicians, the Ukrainian media should read the relevant recommendations for the media set out in the latest Joint Declaration on Politicians, Statesmen and Freedom of Expression, recently adopted by the Special Commissioners. issues of freedom of expression of UN, OSCE, Organization of American States and the African Commission on Human and Peoples' Rights. In particular, the declaration emphasizes that the media should develop and implement internal rules to cover cases where politicians or political parties resort to statements or actions that incite intolerance and xenophobia. On the one hand, the media must ensure that the society would be adequately informed about such actions of politicians and political parties, and on the other hand, media reports alone should in no way provoke intolerance or incite xenophobia.

"Finally, the Ukrainian media must constantly pay attention to the socio-political and security context in which they operate and which ultimately determine the course of developments in the wider region of Eastern Europe. There is good reason to believe that the Russian Federation employed the illegitimate Belarusian government for political confrontation with the conditional Occident, and for the international armed conflict with Ukraine ", - added the IMC.