These are the results of the monthly monitoring of the Institute of Mass Information “Freedom of Press Barometer”. 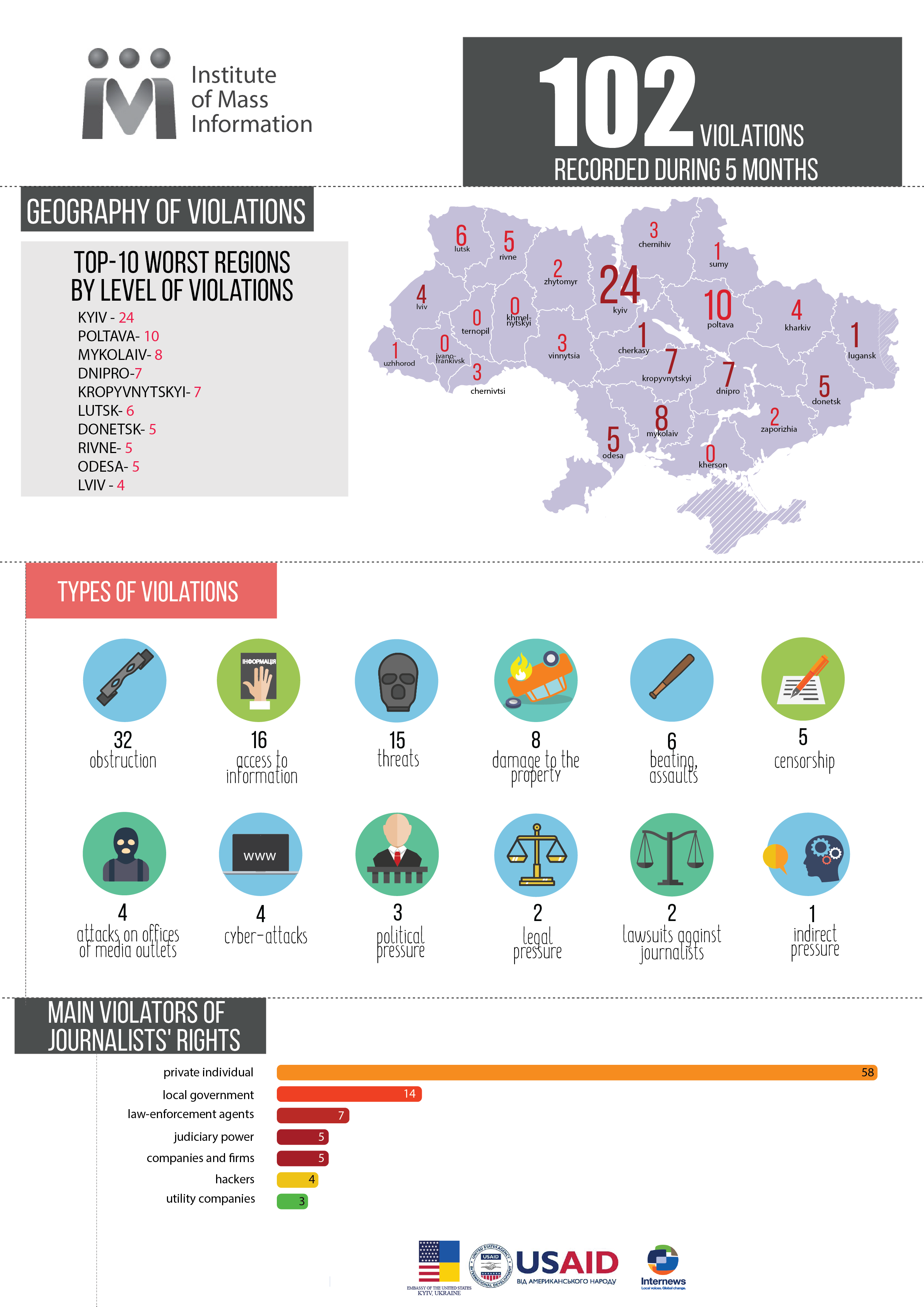 The largest number of violations in the five months of 2017 was recorded in the category «obstruction to journalists’ lawful professional activities» – 32 cases (during the same period of 2016 – 38 cases).

At the same time, IMI has observed decline in the number of cases of physical aggression against journalists in Ukraine. In the five months of this year, IMI experts recorded 6 cases of beatings and attacks on journalists. For comparison, during the same period last year 18 cases of attacks and beatings were recorded.

This year has manifested a growing tendency in violations in the category «access to public information». In particular, since the beginning of the year IMI experts recorded 16 cases of violations related to access to information, – and during the same period of 2016 7 such cases were recorded.

Another negative tendency is the growing number of cases of damage to journalists’ property: since the beginning of the year, 8 such cases have taken place, compared to 2016, when one such case was recorded, and even that only one took place in January.

Moreover, IMI has observed the growth in the number of cases of political pressure – in the five months, three such cases were recorded. For comparison, in 2016 three cases were recorded during the entire year. This year, the cases of political pressure were linked to introduction of electronic declaration for representatives of anti-corruption NGOs and their counteragents (which also applies to the bureaus of journalist investigations), pressure on a member of the Supervisory Board of the National Public TV and Radio Company exercised by Oleh Liashko’s Radical Party and the case related to the local authorities in Kirovohradksa oblast.

In the Russian-occupied Crimea, IMI recorded 8 cases of violations of journalists’ rights. Pressure on freedom of press on the peninsula comes predominantly from the occupation authorities’ enforcement agencies – officers of the Russian FSB, Center “E” and others.

More detail about the situation with freedom of press is available on IMI’s website in the section “Freedom of Press Barometer”.

The Institute of Mass Information conducts a monthly all-Ukrainian monitoring of freedom of press by the following categories: physical aggression, censorship and access to information, economic and political pressure, legal pressure and cybercrimes against mass media outlets and journalists. The monthly report includes only cases related to freedom of press and professional journalist activities. More detail about the methodology is available here.

The monitoring is supported by «U-Media» (Internews Network) and the U.S. Embassy in Ukraine.

Russian Ministry of Foreign Affairs hyped NUJU and spread fake news on IMI
Blogs
Sanctions against Medvedchuk’s TV channels. The first estimates
Want to learn first about the new research of the Institute of Mass Media? Subscribe to the newsletter!