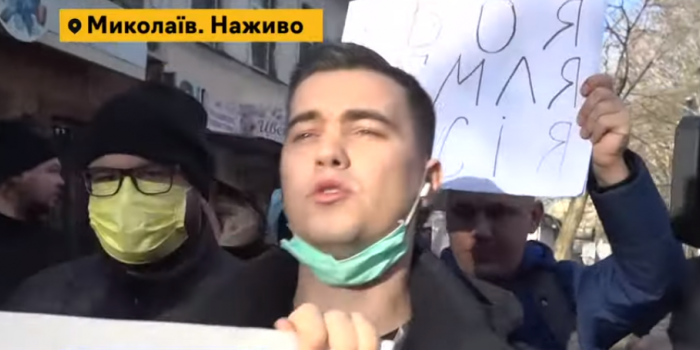 Screenshot from the video of Nash TV

In Mykolaiv, on December 11 about ten people together with two Mykolaiv city council deputees from the “European Solidarity” party tried to interrupt live broadcasting of the Nash TV channel, as TV crew was filming a story about the city. This was reported by the local newspaper "Shypovnyk".

The TV crew recorded the report in the museum of the Partisan movement in the Mykolaiv region in the Second World War. Political scientist Oleksander Lazarev was a reporter behind the camera.

Deputies of the City Council Serhiy Tanasov and Stanislav Martirosov, as well as several young people in masks came to the museum during the tour.

Tanasov began to ask the host where where is Yevhen Murayev (owner of the Nash TV channel) was. n/ed.) And they demanded that the crew "to take buses and left Mykolaiv to Rostov."

"They came and started telling a picture for the Nash channel here," Tanasov told reporters.

Later, people came to the museum with various posters that read: "Murayev is devil", "Take your luggage- go to railway station – to Russia", "Your land is Russia". They did not allow to continue the tour, blocking the way for operators.

At one point on the air, Tanasov said: "Shut your mouth, you fucker, I'd better meet you at the front, I'd shoot you in the head."

Later, patrol police arrived on the scene. A spokesman for the TV channel told police that protesters were obstructing his journalistic activities by closing posters to cameramen and barring them from entering the museum.

After that, the patrol asked to explain their position to MP Tanasov, who said that he saw the "boy the propagandist" occasionally, and came to the museum to ask the price, where he saw the journalists recording the video.

Tanasov also said that he wanted to see Murayev in person.

Lazarev later admitted that they would probably not be able to continue reporting on the museum.