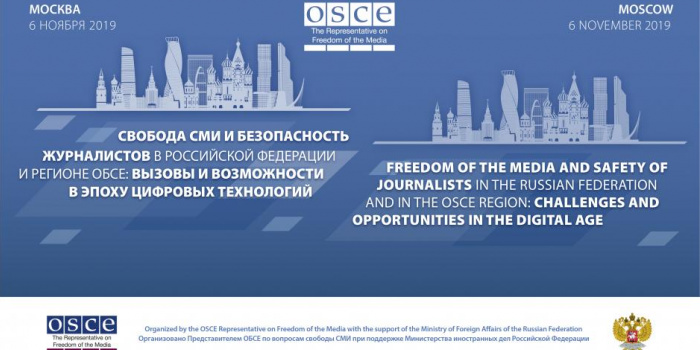 In Moscow on November 6 the Conference on Freedom of the Media and Safety of Journalists in the Russia and in the OSCE region to be held, as to OSCE.

The Conference, organized by the OSCE Representative on Freedom of the Media with the support of the Ministry of Foreign Affairs of the Russian Federation, will discuss openly media freedom issues, safety of journalists, regulation affecting freedom of expression including through Internet, and the issue of disinformation.

Four expert panels will address the following topics: freedom of the media and media pluralism in Russia and in the OSCE region; safety of journalists: new challenges and responses; “fake news”, disinformation: how to tackle them, including through Internet regulation, and international standards on freedom of expression; and media self-regulation, fact-checking and the role of journalism, ethical standards and media literacy.

Speakers will include Harlem Désir, OSCE Representative on Freedom of the Media, Sergey Lavrov, Minister of Foreign Affairs of the Russian Federation, Maria Zakharova, Director of the Information and Press Department of the Ministry of Foreign Affairs of the Russian Federation, and journalists from different media outlets, including Ivan Golunov of Meduza, Igor Rudnikov of Noviye Kolyosa, Nadezhda Prusenkova of Novaya Gazeta, Elena Chernenko of Kommersant, Anna Knishenko of RT, among others.