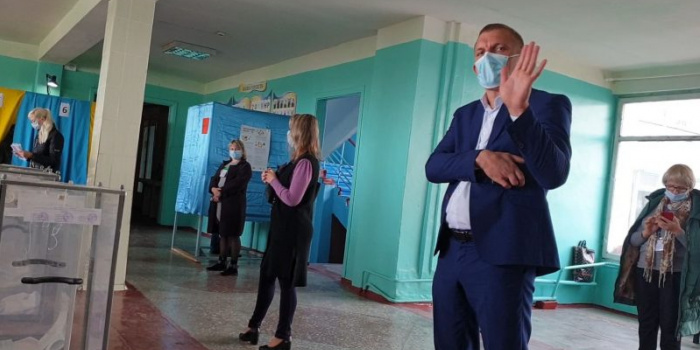 At the town of Ternivka (Dnipropetrovsk region), Vitaliy Aizatulov, a candidate from the “Servant of the People” party, used physical force against Alyona Poddueva, editor-in-chief of the city newspaper Visti Ternivka, at a polling station.

The incident occurred at polling station #120939, as the journalist talked to a woman who turned out to be a pseudo-journalist, as Visti Ternivky reported.

“I approached the woman, introduced myself, showed my press card of the member of the National Union of Journalists of Ukraine and asked who she was. At that moment, the nominee for deputy Vitaliy Aizatulov ran up to us and started shouting: "Don't tell her anything!". When I asked not to interfere in our talk, not to shout, he did not respond and pushed me roughly. I tried to take a photo of the "fake" journalist's press card, but Vitaliy Aizatulov started grabbing my hands, trying to knock my mobile phone from my hands. I tried to stop the actions of the deputy, but he did not react. He just said: "Back off from our journalist!". To my question: "What does it mean “your journalist”?", The deputy shouted to his pseudo-correspondent: "Get out!" ". And this pseudo-correspondent left the polling station, ”Poddueva said.

She filed complaint over this incident with the city police. She asked as well to take measures concerning Vitaly Aizatulov who interfered with her professional activity.