In Crimea journalist for Crimean Solidarity detained while broadcasting live 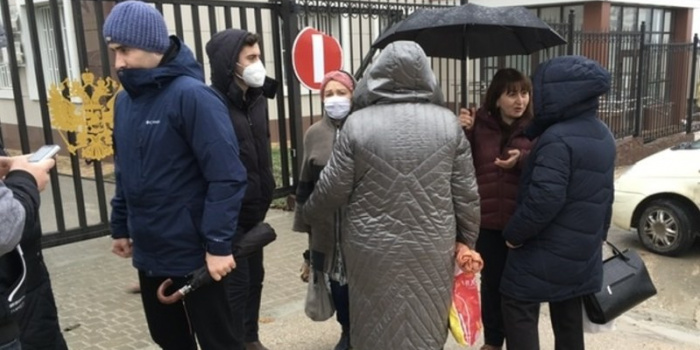 In Bakhchisarai (Russian-occupied Crimea), Russian security forces detained a journalist for Crimean Solidarity, Aziz Azizov, in live broadcast  near the occupying Bakhchisaray district court. This was reported by the civic initiative “Crimean Solidarity".

Also, Russian security forces detained 15 people who came to attend the court hearing in the case of the delegate of the Kurultay of the Crimean Tatar people Edem Dudakov.

The detainees were taken to the Bakhchisarai Regional Police Department.

"We don't know why they have detained us, we were standing at a distance of one and a half meters from each other," said one of the detainees.

Among those detained were Aziz Azizov, a correspondent and civic journalist for “Crimean Solidarity”, and Zodia Saliyeva, the mother of political prisoner Seyran Saliyev.

The journalist was detained in a rude manner, saying: "Come, come quickly, you will shoot inside!" Seyran Saliyev's mother became ill in the police department, they called an ambulance for her, "Crimean Solidarity reports.

Edem Dudakov is accused of inciting ethnic hatred through a comment on social media, which he wrote in 2017.

On the morning of February 17, the chairman of the Crimean Tatar People's Majlis, Refat Chubarov , announced a search of Dudakov’s place.