In August, IMI recorded 12 violations of freedom of speech in Ukraine

12 cases of violations of freedom of speech have been recorded by IMI experts in Ukraine in August. Nine of them were the facts of physical aggression targeting the journalists.

These are the findings of the monthly monitoring of the Institute of Mass Information "Barometer of Freedom of Speech".

The highest number of violations was recorded in the category of “obstruction to lawful journalistic activity” : six. Among the cases of obstruction are the denial of access for the journalists to local self-government bodies, expulsion from the territory of the utility company, denial of accreditation for a number of mass media in Zaporizhzhya to cover Volodymyr Zelensky's visit to the region. 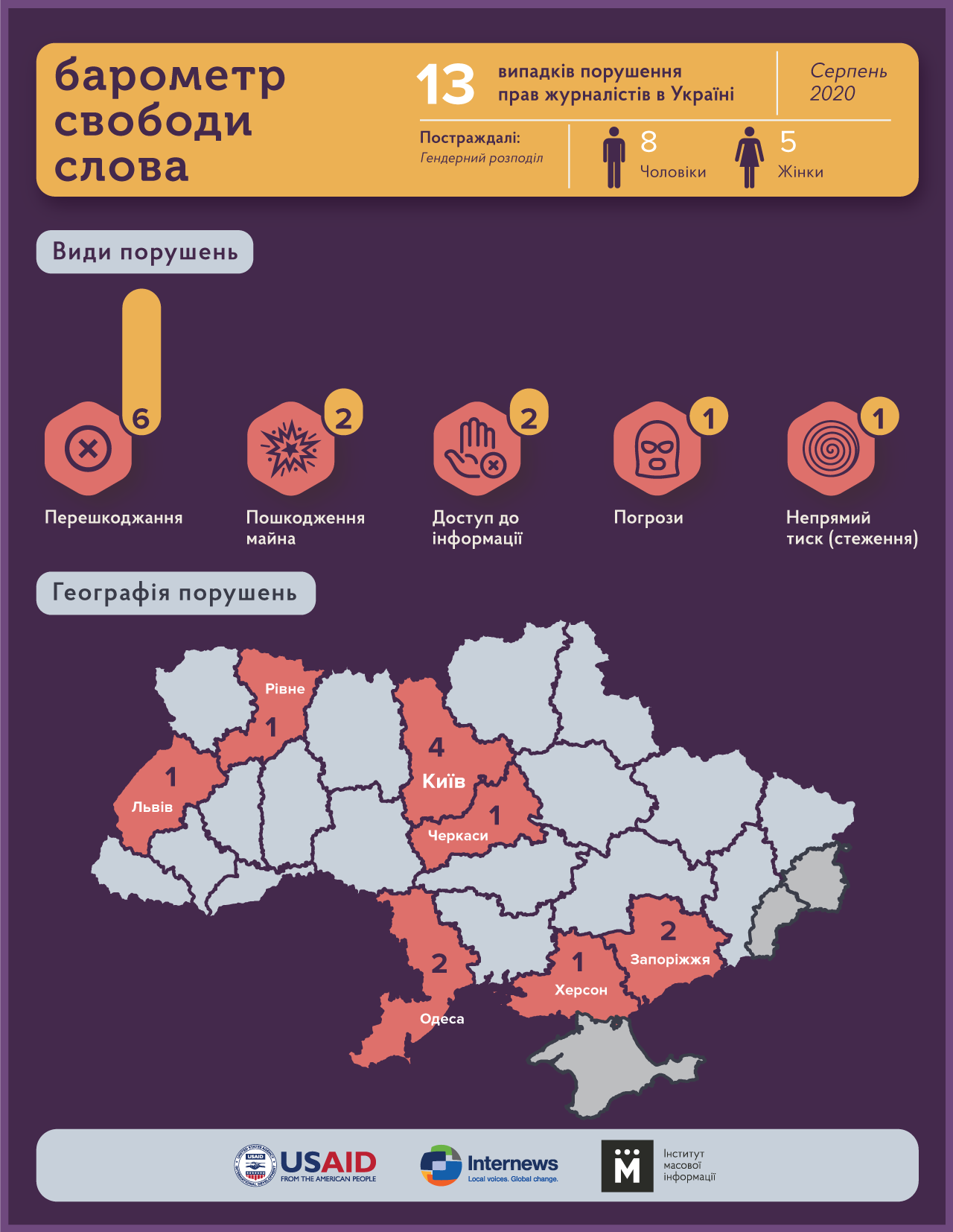 Two cases of damage to the property of the journalists, including cars, were recorded in Brovary, Kyiv region (arson of the car of the “Skhemy” project) and in Cherkasy (the journalist of “Pro Vse” newspaper Oleksander Nosenko’s car was doused with an unknown substance).

There were also two cases of restriction of access to public information and one case of threats and surveillance.

It will be recalled that Mykhaylo Tkach, journalist with the Skhemy program, said that he had found some signs of a listening device inside his home. Lyubov Velychko, journalist from Teksty, noticed the surveillance. Both journalists explained that to their investigative work.

Violations were recorded in seven regions of the country. Kyiv leads by number of violations (four), followed by Zaporizhzhya and Odesa regions (two cases for each), and one case was recorded in each of following regions : Lviv, Rivne, Kherson and Cherkasy.

Thus, since the beginning of the year, IMI has recorded a total of 137 violations of freedom of speech, 75 cases of obstruction, 14 cases of beatings and 13 cases of threats.

The Institute of Mass Information conducts monthly national wide monitoring of freedom of speech in the following categories: physical aggression, censorship and access to information, economic and political pressure, legal pressure and cybercrime against the media and journalists. Only cases related to freedom of speech and professional journalism are included in the monthly report. You can read more about the methodology here .