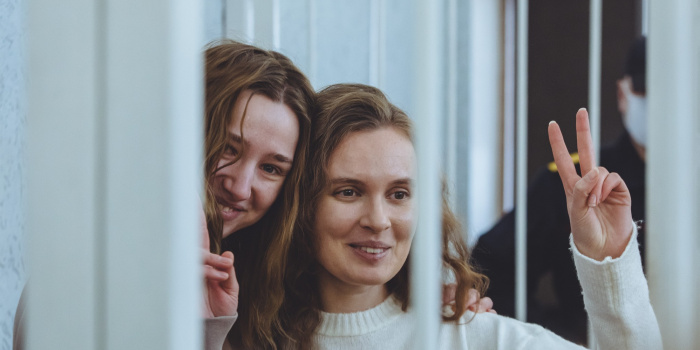 Katsyaryna Andreyeva’s term of imprisonment has been re-evaluated in accordance with the new legislation, Ihar Ilyash, the husband of the jailed journalist, says, as Belsat reported.

As reported earlier, the Law on Amendments to the Codes of Criminal Liability came into force in June, 2021. Among other things, the amendments introduce new rules for counting terms of imprisonment; under them, one day of detention in a pre-trial detention centre is counted as 1.5 days in a minimum or medium security colony (previously, one day in a pre-trial detention centre was equal to one day of being in a penal colony).

On August 10, Frunzenski district court of Minsk ruled to reconsider the term of imprisonment for Katsyaryna Andreyeva (or Katsyaryna Bahvalava (Andreyeva is her pen name -n/tr.) and Darya Chultsova from the moment of their detention to the moment of consideration of the appeal against the sentence. This period (153 days) is counted by the formula 1 day for 1.5 days. Thus, the punishment imposed on the two girls has been reduced by 2.5 months.

At the same time, the man is sure that his wife will be released before the ‘official’ date.

Andreyeva and Chultsova were arrested on November 15 for broadcasting live a violent dispersal of a rally in memory of murdered protester Raman Bandarenka and the destruction of a national memorial in the so called Square of Change by security forces. They were filming and commenting on what was going on from the apartment on the 14th floor of the house on Smarhouski Trakt Street in Minsk, where they had been invited by the hosts. After the rally, armed riot police broke the door to the apartment and detained the crew. On November 20, they were charged under Part 1 of Article 342 of the Criminal Code (organisation and preparation of actions that grossly violate public order).

Their case was considered in Frunzenski district court of Minsk within three days in February. The investigators claim the Belsat crew ‘coordinated protesters and called for further actions’, but the two media workers were just performing their professional duties by reporting from the scene. Moreover, in accordance with the authorities’ version, the livestream of the journalists resulted in the stoppage of 13 buses, 3 trolleybuses and 3 streetcar routes as well as the damage to the city transport agency Minsktrans (around 11,562 rubles). Public prosecutor Alina Kasyanchyk demanded the girls serve a two-year prison term each and their working equipment be confiscated in profit of the state. The defence lawyers asked the court to acquit the defendants due to the lack of evidence, but judge Natallya Buhuk took heed of the prosecution’s opinion.

In late April, Minsk City Court rejected their appeals, upholding the sentences delivered. Behind bars, the girls were placed on the preventive register as ‘persons prone to extremism and other destructive actions’. Being added to the above mentioned list means more severe treatment of an inmate and restricting their rights even in prison.

In June, Andreyeva and Chultsova were transferred to the women’s penal colony in the Belarusian city of Homiel. To date, they have been imprisoned for over 300 days.

Belsat
Liked the article?
Help us be even more cool!
Other news