IMI research: the websites of the so-called “LPR” and “DPR” say only good things about the self-proclaimed authorities, and only bad things – about Ukrainian authorities (upd)

In the online mass media on the non-government controlled territories of Donbas, 82% of materials about the self-proclaimed authorities of the so-called “DPR” and “LPR” are commendatory, 8% are neutral, and no materials with criticism whatsoever.

These are the results of monitoring of online media outlets of the occupied areas of Donetsk and Luhansk oblasts of Ukraine conducted by NGO “Institute of Mass Information” in January of 2017.

In total, about 20% of news at local websites are dedicated to the self-proclaimed authorities of the so-called “DPR” and “LPR”, while the Ukrainian authorities get more coverage — 32% of news. Yet, according to the IMI research data, the predominant majority of materials about the Ukrainian authorities (87%) in the analyzed media outlets turned out to be in an extremely negative tone, 13% of materials were neutral, and none of the surveyed materials was positive. Of the neutral materials, most covered activities of the people's deputy Nadiya Savchenko.

Information on activities of the Russian authorities was presented in 8% of the news; at that, this coverage was predominantly positive (91% of the news), 9% of the materials were neutral, and there were no negative or critical materials.

In addition, during the monitoring, in the media outlets of the so-called "DPR" and "LPR" two types of news were identified that looked commissioned – for the benefit of the political force “Opposition Bloc”, and for the benefit of Victor Medvedchuk.

“With such positively biased coverage of “local authorities”, which indicates local media outlets’ direct dependence from them, now we cannot even discuss any kind of democratic and free elections on the territories of Donbas that are not controlled by Ukraine. The image the local mass media are creating about the situation in the region is extremely distorted. The right of local residents for information is violated, and this takes away their ability to make an informed choice”, – said IMI’s executive director Oksana Romaniuk, commenting the results of the research. 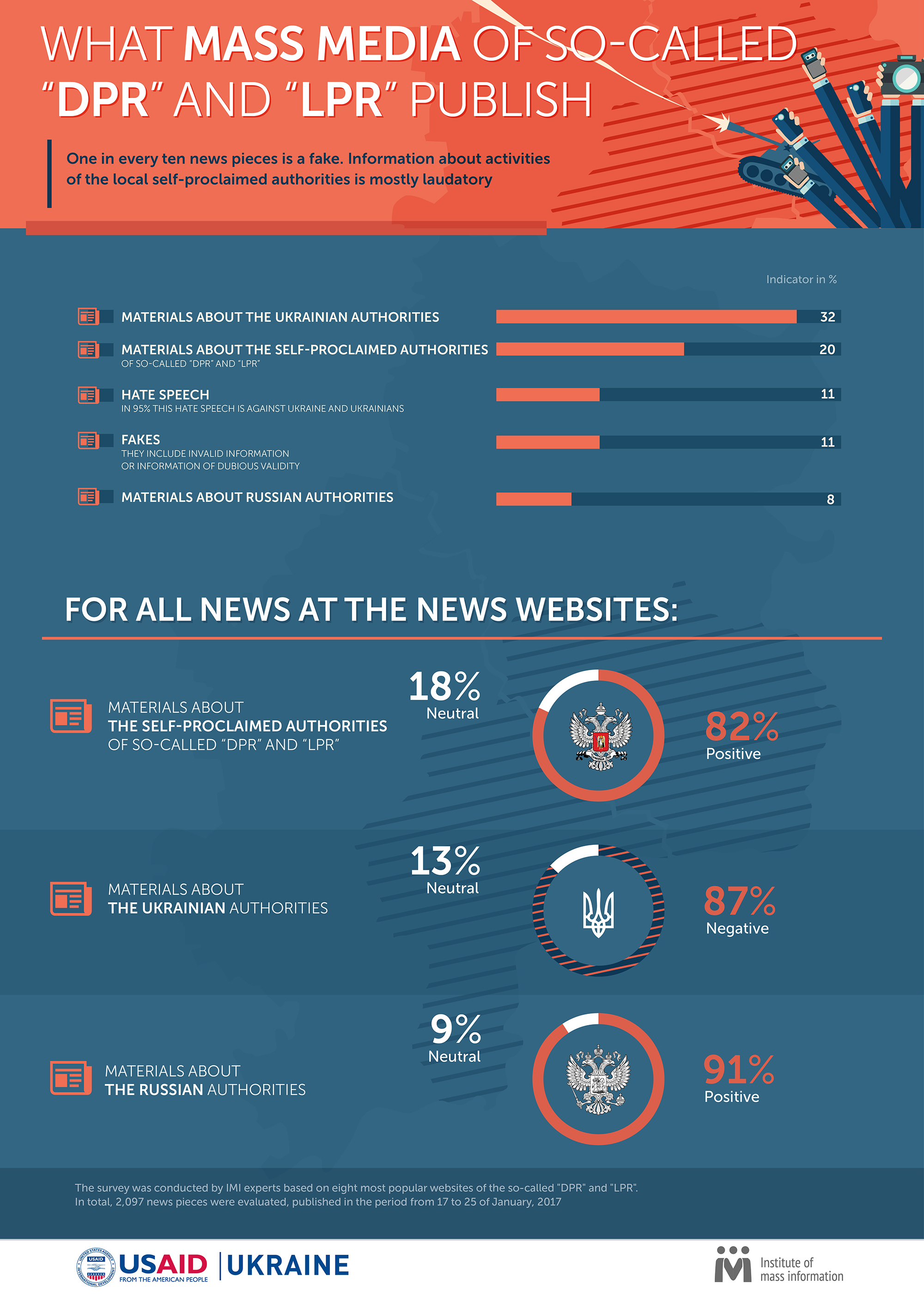 According to IMI, among the narratives the local mass media of the so-called “DPR” and “LPR” were proliferating in January, the following were popular: Trump coming to power and canceling sanctions against Russia, and normalizing the relations with Russia that were “ruined” by Barack Obama; neediness of Ukraine as a country, and its reliance on its Western partners; and also the so-called “LPR” and “DPR” being part of the “Russian world”.

In addition, according to the results of the IMI monitoring, one in every ten news items of online media outlets of the so-called “DPR” and “LPR” includes overt hate speech. At that, the predominant majority of such news (95%) is related to Ukrainian public and authorities: “junta of Kyiv”, “occupational authorities”, “the Nazis”, “punitive expeditioners”, “Kyiv clique”, “Banderites”, etc.

In addition, 11% of the materials published on the resources analyzed by IMI turned out to be fakes, that is, contained invalid or false information. At that, 87% of all fakes were about events in Ukraine, in particular, in the area of ATO.

In addition to explicit hate speech, online media outlets of the so-called “DPR” and “LPR” included many news with negative sentiments against Ukraine and Ukrainians, both in the headlines and in the text proper. For example: “Spring was signified by rampant protest marches and general antagonism to the junta of Kyiv”, “Former punitive expeditioner Sviuk “destroyed” his “Azov”: They are just tattooed carrion”, “Near Kyiv, hunters with thermal sights shoot people at nights”, “The Fourth Reich: in Kyiv, books are burned in furnaces”, etc.

“It will be difficult to painlessly integrate into Ukrainian society the people, who have been staying in the intentionally distorted information space the local media created on the territories beyond the Ukrainian government control. Local population is under influence of propaganda that instigates antagonism and exacerbates fear and xenophobic attitudes towards Ukraine. For this reason, it is extremely important to restore the broadcasting of Ukrainian mass media on these territories, and to alleviate the influence of this propaganda”, said media expert Olena Holub, the supervisor of IMI monitoring programs.

The monitoring was conducted on 8 most popular websites of the so-called "DPR" and "LPR". The research was conducted by IMI experts during January-February of 2017. In total, 2,097 news items were evaluated.

More details about the methodology can be found at the IMI website.

The monitoring was conducted by the experts of the Institute of Mass information supported by the Ukrainian Confidence Building Initiative (UCBI), financed by the United States Agency for International Development (USAID).