In April, IMI has recorded 91 crime in Ukraine. Of these, 85 were committed by russia against the media and journalists in Ukraine. These crimes include murder, shelling of journalists and media offices, threats, harassment, abduction of journalists, cyber attacks on Ukrainian media sites, disabling Ukrainian broadcasting, media outlets shutting down due to russian shelling, inability to work and print newspapers because of infrastructure destruction, and more. At the same time, IMI has recorded six cases of freedom of speech violation for which the Ukrainian side is responsible.

These are the results of the monitoring by the Institute of Mass Information.

For example, in April it became known that the russian military had shot Lithuanian filmmaker and documentarist Mantas Kvedaravičius in blockaded Mariupol. According to the ombudsman, he had been taken prisoner by ruscists, who later shot him. His wife managed to take the filmmaker's body to Lithuania. In 2016, Mantas had made a documentary "Mariupol" about the city, which had been at the forefront of the russian-Ukrainian war the year before. The film was screened at the Berlin Film Festival. 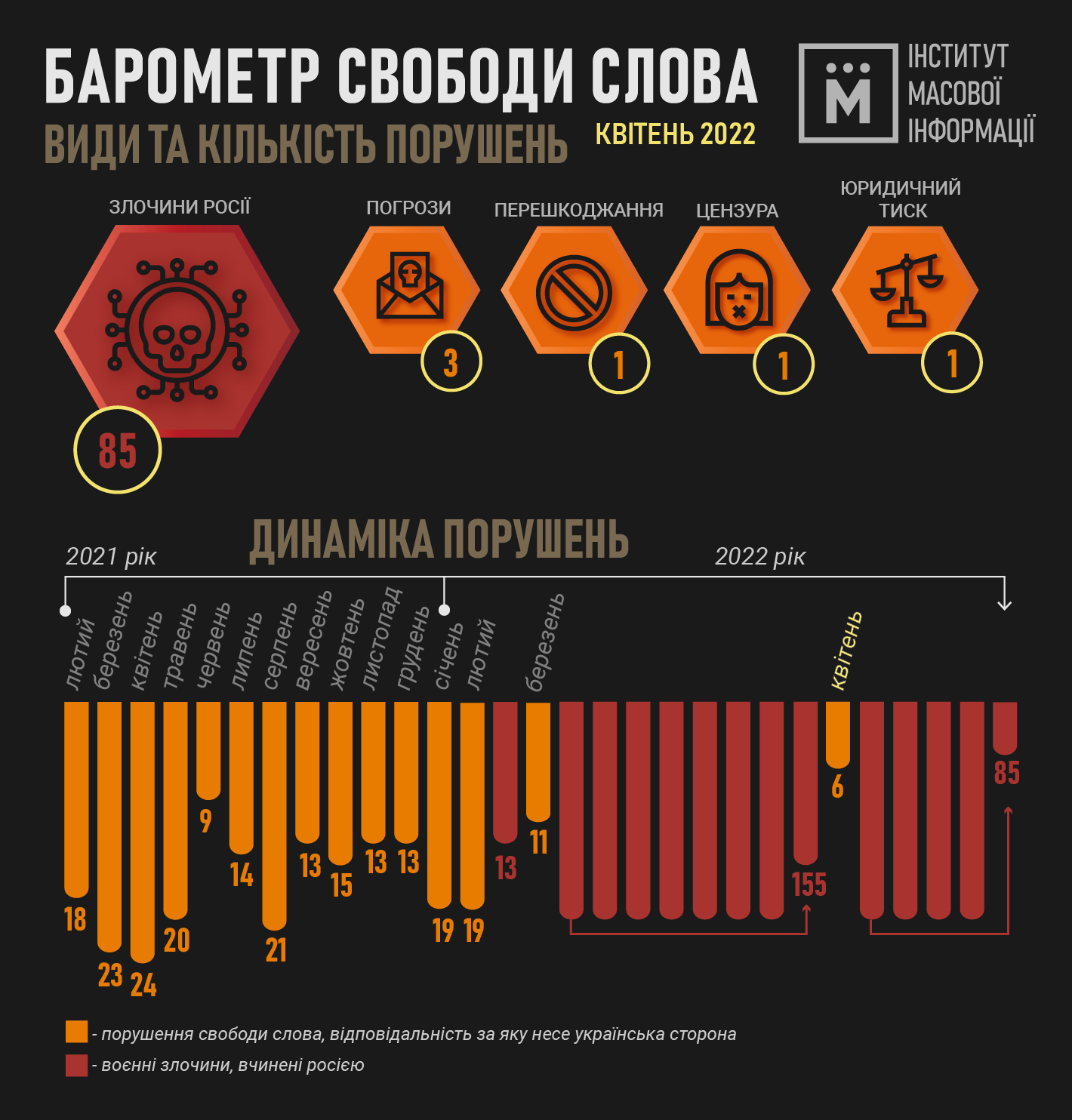 In April, IMI learned that the fate of at least 14 other journalists from Mariupol remained unknown. Since we do not currently have the opportunity to verify what happened to our colleagues, we consider them missing.

In addition, IMI recorded a case of abduction – in the temporarily occupied Nova Kakhovka (Kherson region) on April 3, the russian military took away to an undisclosed location a local journalist and writer, editor of the online publication "Nova Kakhovka City" Oleksander Hunko. Prior to that, the journalist's apartment had been searched. A few hours before the arrival of the armed russians, "New Kakhovka City" had published an article about the violent suppression by the occupiers of a peaceful rally in Kakhovka. Hunko was released by the russians on April 6.

IMI also recorded two cases of shelling of journalists. Namely, on April 4, film crew of the American CNN TV channel came under russian artillery fire near Mykolaiv. In another case, Anastasia Volkova, a correspondent for the Dom TV channel, came under fire in the partially occupied Rubizhne, Luhansk region. She was filming the evacuation of people, and at that time the russians opened fire on the place where the evacuation was to begin.

In April, threats from russians being emailed to Ukrainian media outlets and journalists continued. Threatening letters came from the russian mail.ru service and were signed by various users. Journalists were threatened with interrogations, torture, and imprisonment, and later even sent rhymed threats. Such letters have been received by the media of Volyn, Zaporizhia, Mariupol, and Poltava. Kakhovka journalist Oleh Baturyn, who had previously been abducted and held captive by the russians, also reported threats being sent to his family.

The russians also systematically carry out cyber attacks on Ukrainian media websites. In particular, in April, DDoS-attacks on the site "Detector Media" have been recorded, for which the russian hacker group NoName057(16) took responsibility. The hackers called the journalists enemies of russia and said they were attacking them because the media outlet discredited the russian army and circulated russophobic fakes. In Zaporizhzhia, hackers broke the website for students and the youth "Porohy" and posted russian propaganda there. When trying to access the site, a text appeared in russian on the main screen, saying that russians and Ukrainians were "one people who were divided by the Western world" who "put puppets, ridiculous 'rulers,' and drug addicts in power."

russian crimes against journalists and the media have been recorded in 11 regions of Ukraine. Most crimes were recorded in Zaporizhia and Volyn regions, where journalists have mostly received threats via email.

The situation with freedom of speech in Ukraine, for which the Ukrainian side is responsible

In April, IMI recorded six cases of freedom of speechtion viola in Ukraine, for which the Ukrainian side is responsible. Four of them concerned physical aggression against journalists – obstruction (1) and threats (3).

Among the people threatening journalists in April were representatives of the Moscow Church. Namely, Chernivtsi journalist Halyna Jeremica was threatened by a parishioner of the Moscow Patriarchate during the filming near the Church of the Assumption of the Blessed Virgin in the village of Mykhalcha, Chernivtsi region.

In Chernivtsi, on the eve of Easter, Mykyta Storozhuk, secretary and archimandrite of the Chernivtsi-Bukovynian eparchy (Moscow Patriarchate), threatened to declare war on Serhiy Zaraisky, a journalist and head of the BookInfo news portal, over a publication that mentioned him.

In addition, Kateryna Klochko, a photo correspondent for the Zaporizhzhia website 061.ua, received threats after her Facebook post about an attempt by pseudo-journalists of collaborator Kyryl Stremousov to attend a meeting of volunteers with local authorities on the transparency of humanitarian aid delivery plans.

In addition, IMI experts recorded one case of censorship and legal pressure. Namely, an unprecedented case of censorship is the shutdown of three opposition TV channels – Espreso, Priamyy, and Channel 5. The reasons for the shutdown in the T2 digital network have not been officially announced. Media Movement and the Commission on Journalistic Ethics defended the channels, calling on the President of Ukraine Volodymyr Zelenskyy to intervene in the situation with the shutdown of the TV channels, to explain the reasons and restore their broadcasting.

Violations have been reported in five regions. There are two cases in Chernivtsi and the region. In other regions – one case in each: Kyiv, Odesa, Zaporizhzhia, Mykolaiv.

So far since the beginning of the year, IMI has recorded 55 freedom of speech violations, 19 cases of obstruction, nine cases of threats and access restrictions, seven cases of cyber crimes, five cases of physical assault and one case of censorship.

Details can be found here.