Host of program “Revizor” hospitalized after attack during filming

The host of the program “Revizor” (Novy Kanal) Mykola Tyschchenko was hospitalized after an altercation during filming in one of the hotel, restaurant, catering (HoReCa) enterprises in Kamianets-Podilskyi  (Khmelnytska oblast). This was reported by “Detector Media” with reference to the Novy Kanal’s press service.

According to the report, the project team tried to inspect one of the local HoReCa enterprises but an aggressive owner of the place met them at the entrance.

The man (who immediately claimed he was once a boxer and that he was in the USSR military forces in Afghanistan) closed the doors in front of the camera operators. However, Tyschchenko was already inside.

“All this happened before we managed even to say anything. No matter how we explained that we are journalists and acting within the law, it did not help. While we were trying to settle the situation, Mykola went to the restaurant kitchen. He was not even aware at first he had no camera operators with him. On the way, the owner made several attempts to punch Mykola in the head, but he is a sportsman himself so he dodged the punches”, the project’s creative producer Mashsa Pavlichuk said. Tyschchenko made it to the restaurant kitchen but was met there with aggression as well: two women tried to scratch him and tore his clothes. As Tyschchenko himself said, «I saw no sense in conducting the inspection without the camera operators and went outside to find my team. The owner was following me and tried to punch me again, this time with more success”.

After this, the project team sill managed to inspect a hotel room in the HoReCa enterprise, but under protection of a police unit, which arrived following the team’s call. Later, the team of “Revizor” filed a complaint with the police.

After the attack, the host realized that the punch in the head he sustained from the owner took its tool – and they had to call an ambulance.

As Tyschchenko put it, “I suddenly felt bad, nauseous, and dizzy. The police officers called an ambulance. I was taken to hospital, received several injections and diagnosed with a hematoma and possible concussion. Doctors insisted I stayed at hospital for treatment but I refused as we just came here and have a lot of work ahead of us. And I address owners of restaurants and hotels – if you think you can stop me, you are sorely mistaken”. 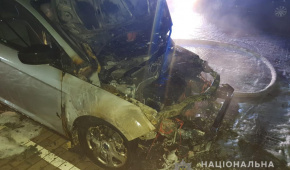 In Cherkasy region, journalists not allowed to attend meeting with mayor
Blogs
Sanctions against Medvedchuk’s TV channels. The first estimates
Want to learn first about the new research of the Institute of Mass Media? Subscribe to the newsletter!