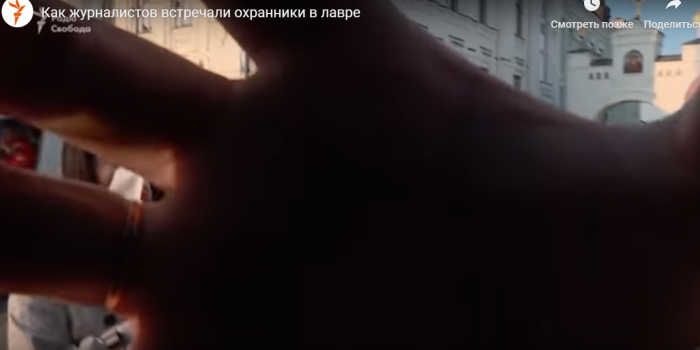 Photo credit : scrrenshot from the video of the RFE/RL

The security guards of the Kiev-Caves Lavra impeded work of the TV crew with the Radio Liberty as they have been shooting the story on 19 of March, as Radio Free Europe/Radio Liberty reported.

The journalists were to cover how quarantine had been organized in Kyiv and among other sites, they worked at the Lavra. The TV crew was going to talk to believers about restrictive measures in churches, but they did not plan to go to churches. But the TV crew had not been even let in the territory of the Lavra.

Several men, who introduced themselves as employees of the Kyiv Caves Lavra, aggressively spoke to the correspondent and obscured the camera. They justified it saying that journalists were not allowed to enter the temple complex, since they had not obtained consent from Lavra administration.

A clergy spokesman also said that filming even in the courtyard of the complex was possible only on written request.

The journalists called the police and filed complaint for obstruction to journalistic activity.