Fueled by years of Trump’s demonization of the media, unprecedented violence breaks out against journalists covering protests - RSF 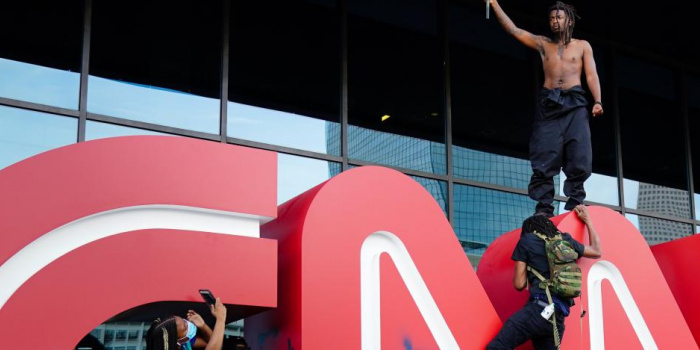 Photo creditt: taken from RSF website
Protests in at least 30 cities across the US following the police killing of George Floyd have resulted in violent attacks from police and protesters alike against journalists. Dozens of incidents have been reported so far, ranging from threats to serious physical assaults. Reporters Without Borders (RSF) condemns these attacks in the strongest possible terms and calls for immediate measures to protect journalists. This is the statement made by Reporters sans frontières.

After the arrest on live television of a CNN crew covering protests in Minneapolis on 29 May, tensions erupted further against media reporting on protests taking place in at least 30 cities across the US, which were continuing as of 31 May. The protests were triggered by the killing by Minneapolis police officers of an unarmed black man, George Floyd, as they arrested him on 25 May.

So far at least 68 incidents have been documented of attacks by police and protesters alike against journalists covering the protests. They have been shot by rubber bullets and pepper balls, exposed to tear gas and pepper spray, beaten, threatened and intimidated and had their news vehicles vandalised, simply for doing their jobs.

“President Trump's demonization of the media for years has now come to fruition, with both the police and protesters targeting clearly identified journalists with violence and arrests,” said Christophe Deloire, RSF’s secretary general. “It has long been obvious that this demonization would lead to physical violence. RSF has warned about the consequences of this blatant hostility towards the media, and we are now witnessing an unprecedented  outbreak of violence against journalists in the US. RSF calls on all US authorities to ensure the full protection of journalists and honor the country’s founding principles in respecting press freedom,” Deloire added.

Among the most serious attacks:

·       In Minneapolis, Linda Tirado, has been left permanently blinded in one eye after being struck by what she believes was a rubber bullet fired by police officers as she photographed protests.

·       In Pittsburgh, Ian Smith - a photojournalist for KDKA TV - posted to Twitter that he had been “attacked by protestors downtown by the arena. They stomped and kicked me. I’m bruised and bloody but alive. My camera was destroyed. Another group of protesters pulled me out and saved my life.”

·       In Phoenix, CBS reporter Briana Whitney was tackled live on air as a protester made a grab for her microphone.

·       In Washington, D.C., Fox News reporter Leland Vittert and his crew were punched, hit by projectiles, and chased by protesters who had gathered outside the White House. ·

Reports are also emerging of arrests and detention of journalists by police. In Minneapolis, Australian 9News US correspondent Tim Arvier was detained by police at gunpoint. In Las Vegas, freelance photojournalist Bridget Bennett was arrested for “failure to disperse” and held overnight while working on assignment for AFP. Ellen Schmidt, a photojournalist at the Las Vegas Review-Journal, was also arrested and held overnight in Las Vegas.

RSF calls for urgent action by US authorities to ensure the safety of journalists covering the continuing protests, including a moratorium on the arrests of journalists and immediate guidance to police making it clear that journalists are not to be shot at or otherwise directly targeted by crowd-control measures, and that journalists must be protected from violent attacks by protesters.