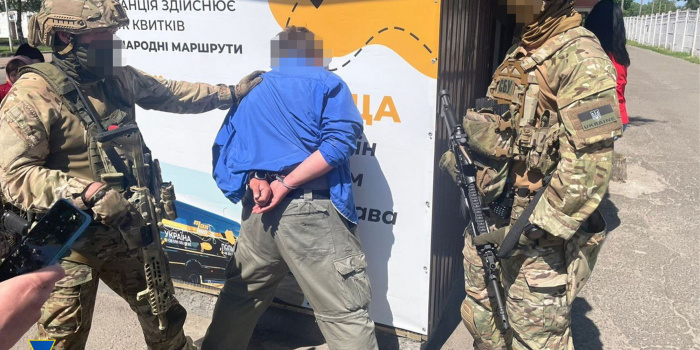 In Cherkasy region, the Security Service of Ukraine detained a russian FSB agent who was collecting information on facilities that could be potential shelling targets for the russian federation.

This was announced by the SSU Office in Cherkasy region.

According to the SSU, the man collected photos and exact coordinates of checkpoints, UAF units and law enforcement departments to pass them over to the russian special services. He was caught red-handed, while filming one of the military facilities in the region, and did not have time to pass the information on.

The offender turned out to be a local resident who used to work at one of the executive state departments, and an active "fan" of the banned Shariy's party.

"russian special services regularly kept in touch with him. They were interested in the coordinates – not only of law enforcement departments and military units, but also of administrative state buildings. For anonymity's sake, the agent communicated with his supervisors exclusively through a messenger. He was promised a financial reward for each message," the SSU said.

The special services are checking whether he was preparing a terrorist attack on the territory of Ukraine, as he asked the FSB for handguns with silencers and scopes, bullets and magazines, grenades and incendiaries, anti-personnel mines MON-50 with radio detonators.

Now the agent is detained, he has been notified of suspicion under Part 2 of Art. 111 (“Treason”) of the Criminal Code of Ukraine.