"For impact", Bihus.info nominated for Press Freedom Award 2019 by RSF 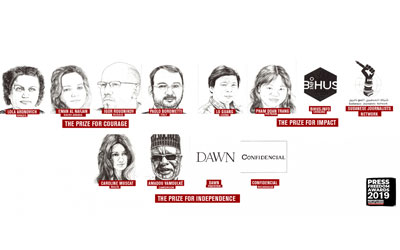 "Reporters sans frontières" has announced the nominees for Press Freedom Awards 2019.  At the category "Impact" they set forth Ukrainian investigative journalists Bihus.info. As they said on its webportal, "Bihus.info from Ukraine - The reporter collective founded by Denys Bihus has repeatedly published cases of corruption and abuse of power by high-ranking politicians of whom several were prosecuted and had to resign."

The laureats from 12 countries will be awarded in Berlin on September 12, in three categiories: "For Courage", "For Impact", "For Independence". Until now, the Press Freedom Award by RSF had been annually awarded in Paris, last year it was done in London, and this year, on the occasion of  its 25th anniversary, the German section is organizing this year's event. "Many of the nominees face constant threats or have been imprisoned several times for their work - yet these journalists refused to be silenced and continue to raise their voices against the abuse of power, corruption and other crimes. Rather than dishearten us, the difficult situations these journalists face inspire us with the will to achieve change. Courage in the pursuit of journalistic ideals is a formidable motivating force for all those who want to address humankind’s most important challenges." says Christophe Deloire, secretary-general of the international organization of "Reporters sans frontières ". Among other nominees there are: For Courage: Igor Rudnikov from Russia - The founder of the newspaper Novye Kolesa has been the target of several attacks because of his research on corruption and the misuse of public funds. He was also jailed during almost two years for his work. Eman Al-Nafjan from Saudi Arabia - The blogger and journalist has campaigned massively for women to be allowed to drive cars and get more rights. Arrested along with other women’s rights activists, she was freed conditionally. Considered as a “traitor”, she could be jailed for up to 20 years. Paolo Borrometi from Italy - Because of his intrepid reporting about the Mafia he is regularly threatened with death and lives under constant police protection. Lola Aronovich from Brazil - The blogger has become known throughout the country for her feminist texts and her commitment to women's rights. Under the “Lola Law”, in homage to her fight against online violence, the federal police can take over any investigation into online crime of a misogynistic nature. Nonetheless, she is attacked repeatedly and massively and has received hundreds of death threats online. For the Prize for "Impact" besides Ukrainian journalists, there are: Pham Doan Trang from Vietnam - The founder of the online magazine Luat Khoa lives in one of the most repressive states in the world. With her articles, she helps her fellow citizens to defend their civil rights. She is also a strong advocate for LGBT rights. Because of her work, she was beaten and arbitrarily imprisoned several times. Sudanese Journalists Network from Sudan - The network publishes reports about violations of press freedom on Twitter, and speaks up for imprisoned journalists. Lu Guang from China - The well-known photojournalist documents social and environmental problems issues resulting from rapid industrial development. He is based in New York since 2005. However, during a visit to China he was arrested on 3 November 2018. His family and colleagues have not heard from him ever since. For Independence: Caroline Muscat from Malta - After the murder of her colleague Daphne Caruana Galizia in 2017, she founded the independent investigative website The Shift News, which also researches corruption. Despite massive pressure, she continues unswervingly. Dawn from Pakistan - The country's oldest daily newspaper is the only one that continues to resist military rule. Its distribution was banned during the 2018 elections. This year the government instructed advertisers not to publish ads with Dawn. Amadou Vamoulké from Cameroon - The journalist headed state radio for nine years and repeatedly spoke out against the government's monopoly on television coverage and the criminalization of media workers. In 2016, he was arrested for allegedly wasting millions in public funding. Confidencial from Nicaragua - The independent weekly has made a name for itself with its investigative research and in-depth analysis of the political system - but also many enemies. After several death threats, editor Carlos Fernando Chamorro fled to Costa Rica to work from there. The Press Freedom Awards were presented for the first time in 1992. "The awards are a signal to repressive regimes that the work of courageous women and men is perceived worldwide and that we don't leave those being threatened, harassed and imprisoned alone," as  RSF Germany's Board Spokesman Michael Rediske told. The "Reporters Without Borders"’ Press Freedom Awards honour particularly courageous and independent journalists whose work has had a great impact.
Liked the article?
Help us be even more cool!
Other news