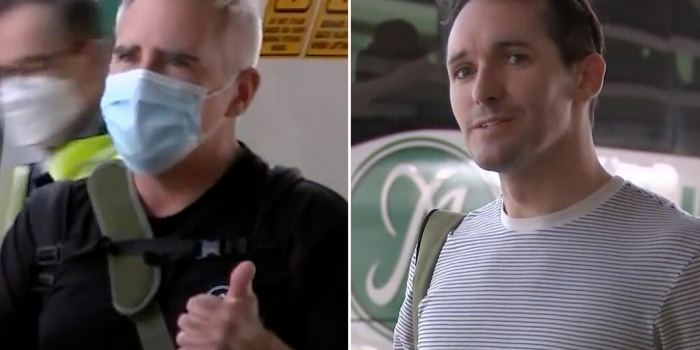 Two Australian journalists have rushed out of China after a five-day diplomatic standoff that began when Chinese state security officers paid them unannounced visits, prompting fears that they would be detained.

The journalists — Michael Smith, the China correspondent for The Australian Financial Review, and Bill Birtles, a correspondent with the Australian Broadcasting Corporation — arrived in Sydney on Tuesday morning after their organizations hastily arranged flights. They were the last two correspondents working in China for Australian news outlets.

Their exit, which occurred after negotiations between Australian and Chinese diplomats that led China to revoke a ban on their departure, added another conflict to the deteriorating relations between the two nations. It also highlighted Beijing’s increasingly heavy-handed tactics to limit independent journalism in the country.

“Their rushed departure from China marks a new low in a relationship which had already seemed to have reached rock bottom,” said Richard McGregor, a senior fellow at the Lowy Institute and a former China correspondent for The Financial Times and The Australian.

“Other countries grappling with China should take note,” he added. “If their bilateral relationship deteriorates, then their own nationals will be in the firing line, as well.”

For Mr. Smith and Mr. Birtles, the sense of vulnerability — and the departure process — accelerated with visits from Chinese state security last week. Seven officers, nearly all in uniform, called on each of them at the same time: after midnight on Thursday at the homes of Mr. Smith in Shanghai and Mr. Birtles in Beijing.

Both men reported extensively on the case, including the detail that Ms. Cheng was being held under “residential surveillance,” a sweeping detention power that can keep people in custody for up to six months, denied visits by relatives or lawyers.

The Chinese authorities have not disclosed any accusations against Ms. Cheng, but an investigation of a foreign national working for Chinese state news media could draw questions about access to sensitive information and officials.

Mr. Smith said there was no good reason to draw him or Mr. Birtles into the case other than an attempt at intimidation.

“They really asked me basic questions, like: ‘Do you know her? Have you met her?’ And I’ve only met her once, at a bar in Beijing with a lot of other journalists, and I didn’t actually talk to her,” he said in an interview on Tuesday. “I didn’t have much to offer them, so it bemuses me as to why I was a target of their investigation when obviously I had no connection with her.”

He and Mr. Birtles, a longtime correspondent for Australia’s main public broadcaster, had already been warned of rising pressures — Australian diplomats told them early last week that they should consider leaving China. They had both planned to depart on Thursday.

Mr. Birtles was hosting a farewell dinner when the Chinese officers arrived. Mr. Smith was woken up by their arrival.

“They were filming me, there was a spotlight on me, and they read me a statement which was asking me if I understood China’s national security laws,” Mr. Smith said.

The officers told them they were barred from leaving the country and asked them to sign a statement saying they understood the message being delivered. They were told they would be contacted the next day to schedule a time to be formally questioned.

Mr. Birtles immediately called the Australian Embassy and arranged to be taken there, where he stayed for the next few days. Mr. Smith was also placed under diplomatic protection while Chinese officials repeatedly demanded interviews, which both journalists refused, citing fears for their personal safety.

The Australian government eventually secured a commitment from Beijing that they would be free to leave China after a one-hour interview. Mr. Birtles was questioned by the Chinese authorities on Sunday, alongside Australia’s ambassador to China, Graham Fletcher.

“Our embassy in Beijing and consulate general in Shanghai engaged with Chinese government authorities to ensure their well-being and return to Australia,” Marise Payne, Australia’s foreign minister, said in a statement.

The standoff and abrupt departure of the two journalists will be widely interpreted in Australia and the United States as a symptom of worsening ties with China.

Australia’s decades-long arc of economic growth has depended heavily on exports to China, especially of iron ore, coal and other raw materials, and Australian universities depend heavily on tuition-paying students from China.

But Australia, a close ally of the United States for more than a century, has increasingly pushed back against Chinese political influence and diplomatic demands. Australia led calls this year for an international inquiry into the coronavirus pandemic, angering Beijing, which has been prickly about evidence of delays and cover-ups that slowed its initial response.

Australia’s right-of-center government also pushed through a law against foreign political meddling, which was widely seen as directed at the Chinese Communist Party.

More broadly, the forced return of Australia’s last two correspondents in China was the tensest episode so far in a period of tightening conditions for foreign journalists in the country.

The ABC’s Beijing bureau opened in 1973, shortly after Australia normalized relations with China, making it one of the first foreign news outlets to set up operations in the country. Now, at a major inflection point, only a few international correspondents remain in the country, and Australian news media faces a blackout.

“Since the early ’70s, we’ve been in China reporting all the ups and downs,” said Gaven Morris, the ABC’s news director. “The fact that this is the occasion when we’ve been effectively urged to leave is pretty significant.”

For many years, the Chinese government relied on less-extreme tactics. Beijing has often applied pressure on foreign journalists whose coverage it dislikes by giving them visas shorter than the usual 12 months. But since early this year, China has become notably more willing to make reporters leave.

In February, the government announced the expulsion of three journalists working for The Wall Street Journal in China, saying that was punishment for an offensive headline — “China Is the Real Sick Man of Asia” — on an opinion article about China that appeared in the paper. In March, the Chinese government announced that over a dozen American journalists working for The New York Times, The Wall Street Journal and The Washington Post had to leave China.

Beijing said that was in retaliation for the Trump administration’s putting a cap of 100 on the number of Chinese citizens who can work in the United States for five major state-run Chinese news organizations.

That standoff worsened in recent weeks, when the Chinese Ministry of Foreign Affairs stopped renewing credentials for foreign journalists working for American news outlets in China and suggested that those journalists could be expelled if the Trump administration further restricted staff members of Chinese news outlets in the United States.

And now, direct pressure by Chinese security officers appears to have prompted a diplomatic standoff driven by the two journalists’ fear of being held in an authoritarian justice system.

Though it is hard to tell if the exit bans would have led to detentions, Mr. McGregor said the threats should be seen as severe. “Once dragged into an investigation in China, they would have had no rights for an extended period of time, and might have also been detained indefinitely,” he said.

Similar examples are not hard to find. Before Ms. Cheng’s detention, the Australian government was at loggerheads with Beijing over another detained Australian of Chinese heritage, Yang Hengjun, a writer and businessman also known as Yang Jun.

He has been held in China since early 2019 and was indicted this year on espionage charges, which he denies. This week, he was granted access to a lawyer for the first time in nearly two years of detention, and in comments conveyed to his family, he issued a strong critique.

“They can abuse me; I have had no access to legal representation — this is political persecution,” he said. “I am innocent and will fight to the end.”

European parliament calls for harsh economic sanctions on 'criminal' Belarusian regime - RFE/RL
Blogs
Sanctions against Medvedchuk’s TV channels. The first estimates
Want to learn first about the new research of the Institute of Mass Media? Subscribe to the newsletter!