Former Ecuadorian President Rafael Correa said Tuesday his country was aware that WikiLeaks founder Julian Assange was interfering in the 2016 US presidential election from the safety of Ecuador's embassy in London, where he lived under political asylum until this year, as CNN reported.

"We did notice that he was interfering in the elections and we do not allow that because we have principles, very clear values, as we would not like anyone to interfere in our elections," he said. "We are not going to allow that to happen with a foreign country and friend like the US."
Correa granted asylum in 2012 to Assange, who took refuge in the country's London embassy to avoid extradition to Sweden on sexual assault allegations, which he denies. Correa fueled his rise to power on anti-US vitriol and aligned with Assange after WikiLeaks published highly classified Pentagon materials.
Correa's comments came one day after CNN published an exclusive report about surveillance reports that describe how Assange transformed the Ecuadorian embassy into a command center and orchestrated a series of damaging disclosures that rocked the 2016 presidential campaign in the United States.
The report cited hundreds of surveillance documents detailing Assange's time inside the embassy. The documents describe how Assange met with Russians and world-class hackers at critical moments and acquired powerful new computing and network hardware to facilitate data transfers just weeks before WikiLeaks received hacked materials from Russian operatives.
"WikiLeaks' justification was that they were providing truthful information," Correa told CNN. "Sure, but (it) was just about Hillary Clinton. Not about (Donald) Trump. So, they were not saying all the truth. And not saying all the truth is called manipulation. And we are not going to allow that."
WikiLeaks did not respond to multiple requests for comment regarding the exclusive CNN reporting. Assange's lawyers declined to comment.
In the interview on Tuesday morning, Correa distanced himself from Assange, even though he has steadfastly defended his decision to grant asylum to the WikiLeaks founder in 2012.
"You know how many times I've spoken with Assange? Never. I don't know him," Correa said. "Just one time he interviewed me when he worked for Russia Today, via Skype."
Before Assange arrived at the embassy in 2012, he hosted a short-lived program on RT, an English-language television network controlled by the Kremlin. In the RT interview, Correa explained how he admired the American people but had problems with US foreign policy.
Correa was president of Ecuador from 2007 to 2017 and made a name for himself as a leading US antagonist in Latin America, in the mold of the late Venezuelan dictator Hugo Chavez.
The WikiLeaks disclosures undermined Clinton while she tried to consolidate her liberal base as she secured the Democratic nomination. They also gave Trump a lifeline when his campaign was on the brink of collapse in October 2016 after the "Access Hollywood" tape came out.
Despite Correa's ire against US policies, he rejected the notion that his government worked with Assange to help Trump win. The Kremlin's interference in the US election -- which was aided by WikiLeaks -- was designed to get Trump elected, according to US intelligence agencies. Assange denies that he worked on behalf of the Kremlin.
"I am way closer to Hillary Clinton than Trump," Correa told CNN. "I know Hillary, I admire her. I was a student in the US, doing my doctorate when Bill Clinton was (president). Trump is an enemy of our migrants. Why the hell are we going to support him? None of this makes sense."
CNN reported on Monday that in the wake of the October 2016 email dump targeting Clinton campaign chairman John Podesta, the US government raised concerns with Ecuador that Assange was using their embassy to help Russian election meddling. Shortly after that, the embassy cut off Assange's internet access and phone service.
But in the interview, Correa did not indicate that US outreach fueled that decision and he denied personally receiving a warning from US officials about Assange before the 2016 election.
The former Ecuadorian leader also said it was "nonsense" that Assange was "the head of the embassy," downplaying Assange's influence. The surveillance reports obtained by CNN described in extraordinary detail how Assange's power rivaled that of the ambassador and said Assange used his connections to senior officials in Ecuador to threaten diplomats and guards at the London embassy.
Correa was succeeded by Lenín Moreno, a close ally who had been his vice president for more than six years. But after Moreno was elected, he quickly turned against Correa and started undoing many of his policies, including his support for Assange. Moreno revoked Assange's asylum in April, paving the way for British police to remove him from the embassy.
When that happened, Correa said Moreno was "the greatest traitor in Ecuadorian and Latin American history," and said Moreno's decision was "a crime that humanity will never forget."
CNN
Liked the article? Help us be even more cool!
Other News 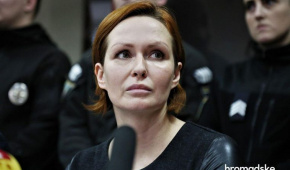 Expert study on Kuzmenko’s walking gait considered at bar
Blogs
Sanctions against Medvedchuk’s TV channels. The first estimates
Want to learn first about the new research of the Institute of Mass Media? Subscribe to the newsletter!