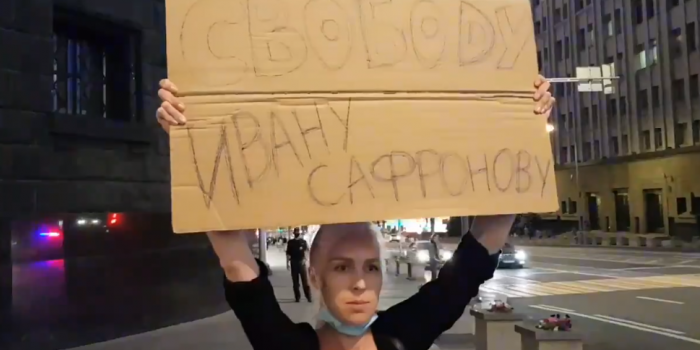 At least eight journalists have been arrested near the Federal Security Service (FSB) headquarters in Moscow for conducting single-person demonstrations in support of journalist Ivan Safronov, who was arrested on treason charges earlier in the day on Tuesday, as Meduza reported.

Update: At least two dozen people were arrested outside of the FSB building in Moscow throughout the day on July 7, during ongoing demonstrations in support of Ivan Safronov. Television host Ksenia Sobchak was among the detainees. Meduza correspondent Liliya Yaparova was also arrested for protesting.

The arrested journalists include Kommersant correspondents Elena Chernenko and Kristina Dyuryagina, as well as Proekt correspondent Olga Churakova, among others.

In particular, law enforcement claimed that Elena Chernenko’s demonstration was “not allowed due to quarantine.” During her picket, Chernenko stated that she doesn’t believe the FSB’s claims and demanded a transparent investigation into Ivan Safronov’s case.

Ivan Safronov was arrested on the morning of July 7 and charged with treason. According to a statement from the FSB, Safronov allegedly collaborated with an intelligence agency in a NATO member state to collect and transmit classified information about Russian military-technical cooperation and national defense and security.

Law enforcement have also taken journalist Taisiya Bekbulatova — the editor-in-chief of Holod Media and a former Meduza special correspondent — in for questioning as a witness in Safronov’s case. Her home was searched earlier in the day on July 7.