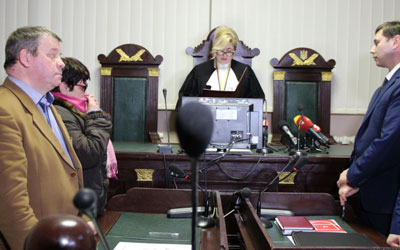 By decision of the Galytsky court in Lviv the Ukrainian journalist Olena Boyko (real name Vishchur) was arrested for 60 days (until the 17th of March), as to Radio Free Europe. The pro-Russian journalist came to Moscow on March 2016 to take part in TV talk-shows, as an expert. She was used to criticize the Ukrainian authorities and supported Donetsk and Louhansk Popular Republics (DPR and LPR).

Boyko herself asked they imprisoned her, because she feared for her life staying free. Boyko was arrested without right to be let out on bail.

“The person committed the crime against the state of Ukraine, at present she will be imprisoned and this is important. What happened in the court is evidence that the Russian slogan “Russia does not leave its own behind does not function… This woman has been on a wanted list, and as she crossed the border of Ukraine (t/n: she was deported from Russia on the 16th of January for breaches to immigration law of Russia), SBU officers arrested her”, as Oleg Aleksandrov SBU press officer in Lviv region told.

The criminal charge of an “attempt to territorial entity and inviolability of Ukraine” is filed against Boyko.

Preobrazhensky court of Moscow decided Boyko had violated the rules of sojourn on the territory of Russian federation, fined 5 thousands of roubles () and decided to deport her.